Difference between Ego and Self Respect

The difference between Ego and Self-respect has been established in faint boundaries. Self-respect, self-esteem, dignity, ego are some terms very close to each other.

All of them are related to self – the way we look at ourselves, the way we value us and the way we expect value from others.

Self respect and ego are two powerful terms that determine much of a person’s behavior and personality.

Ego has two dimensions in psychology. One was given by Freud in his Psychoanalytical theory and the other is the interpretation followed by general and social psychologists.

General psychologists define the term ‘ego’ as an over attachment to self. It makes us sensitive to criticisms and often becomes a hurdle for personal and professional achievements. Ego is a false self-image, unreasonably heightened.

An employee who gave a bad presentation at the office got criticized by the boss. He starts feeling that he has been unduly insulted and instead of apologizing for his own fault, he starts counter criticizing and questions the authority. The negative thoughts he develops spreads around his work and people associated.

Ego is a very interesting concept in psychology. Sigmund Freud, one of the most well-known neurologists and psychoanalyst of all times, had categorized human personality into three parts, in his Psychoanalytical Theory.

The Id – driven by pleasure principle

The Ego – driven by reality orientation

The Superego – driven by moral principle

Ben has an exam on Monday and his brother Bryan has brought tickets for a movie on Saturday that they were dying to watch. What would he do? After juggling with two minds Ben finally decides that he would study for extra hours till Saturday, so that he can go to the movie in the evening without hampering his exams. He found the right balance between ‘what he wants to do’ and ‘what he should do’. 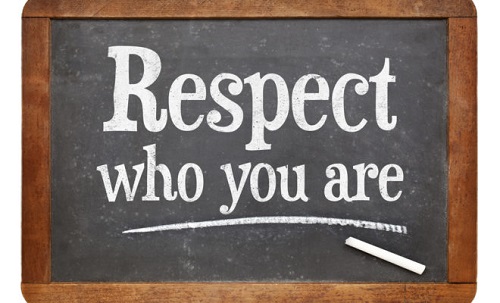 Self-respect has a universal interpretation that is true under all circumstances. It is the value and regard that one has for himself/herself. Self-respect is the underlying motivation behind all virtues. It is the regard we have for ourselves and guides one’s actions. Self-respect is standing up and treating the self with dignity.

John recently got  job in a software company. He is a hard worker and is trying his best to cope with the environment. But he gets bullied and teased everyday by his colleagues for no reason. The misbehaviors continue and he eventually starts feeling insulted and under estimated. He finally decides to take this matter to the authority and stand up for himself, without getting into a direct conflict at workplace.

There are crucial aspects that set the boundaries between ego and self-respect. Some of them are discussed below.

The underlying feelings –  Ego is driven by an underlying feeling of insecurity and self-doubt. Self-respect is driven by feelings of self-worth and self-confidence. Ego brings pride while self-respect is about self-control and worth. Ego is a persistent feeling of self-elation whereby the person is not ready to accept anything that makes him feel inferior. It results in resentment and can drive the person away from reality.

The underlying causes – A poor ego control often has its roots in childhood. Faulty  parenting  strategies (like dominant or over-protective parents), bullying, broken homes are some of the factors that show up as ‘ego’ in later years. Ego is also used as a defense against anticipated rejection or insult.

Self-respect is often the result of good parenting and a childhood free from abuse, where the child grows up to believe in himself/herself and is free from any feelings of insecurity. It is the shield for fighting against any threat to self-esteem.

The underlying motivation –  Ego aims to sustain the self-pride even if it results in the complete alienation of the person from the world. It may lead to powerlessness and often preys on relationships and friends. While self-respect is a balance between ‘what I feel’ and ‘what others feel’, ego is self-oriented. Egocentric people often lack empathy and cannot stand in others’ shoes.

Effect on self and surroundings – It is very difficult to keep up with people who put ego as a priority. Egoists rarely admit their mistakes. They are likely to choose ego over anything that is close to them, even if it is hurtful for them or the people around. Self-respect is logical. It does not let us be headstrong, at the same time maintains to preserve the self-worth. People who are associated with them often have an understanding and mutually rewarding relationship. Children who are brought up by egoist parents grow up to build the same defensive wall around them. Parents who teach their children how to live with respect, grow up to be self-reliant and confident.

Consequence – Self-respect results in personality development and makes the person self-dependent. It stops the person from believing he/she is superior to others, and at the same time it teaches him/her how to value himself/herself. Ego often leads to unhealthy competition and rivalry. It creates an urge to prove oneself even if it is by demeaning others. Ego can destroy relationships, hurt others and make a person isolated in his own world. It makes the person emotionally vulnerable and has impacts on his psychological. Self-respect, on the other hand, allows growth, maturity and helps to cultivate self-worth. It is not defensive and improves one’s physical, mental and psychological health.

It is argued that ego and self-respect are at the two extreme ends of a continuum. Overdoing self-respect brings in ego. Both ego and self-respect co exists in each one of us and we must know how to get the perfect balance in them. Self-love and self-confidence are essential for our growth but it should not reach a point where we become selfish and cannot accept reality. It is important to have faith in yourself and be confident with your actions.

As Albert Einstein had wittily stated

Ego = 1/ Knowledge. The more the knowledge, the lesser the ego.