Difference Between AGP and PCI 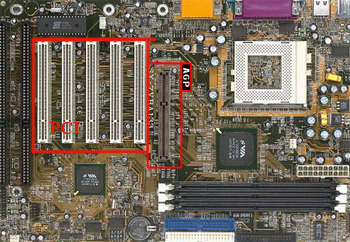 Computers have evolved from the specific work horses of yesteryear into the jack of all trades machines of today. The reason for buying a computer could range from basic word processing to high end video processing and animation. As such, computers also come with different specifications and attachments. In order to make computers flexible enough to configure, computer engineers have designed slots where you can add extra hardware that could add more functionalities to your computer. The current standard for this is the PCI (Peripheral Component Interconnect) slot.

It has proven itself to be very useful over the years and it has been existent in computer since it was introduced in 1992. It might have gone a few changes but it has survived a lot of computer technologies that have been introduced then went obsolete.

Given the general advantages of the AGP, the PCI seems to be outliving it still. Video Cards have now outgrown the AGP standard and it is being phased out in favor of a faster one. The ‘general use’ nature of PCI, on the other hand, has allowed it to prosper, even if a few of the add-ons that were using PCI have begun to migrate to USB.