Difference Between Boomers and Zoomers

With different generation terminologies coming into the limelight with the inception of heavy internet usage, confusion has always been rife. Most individuals get into the confusion of which generation they belong to or even what it’s called. Some are not even informed that such names exist at all.

With that in mind, it’s time to break the confusion. It’s time to draw the sharp distinction between two of such generations namely boomers and zoomers.

Who is a Boomer?

Boomers or baby boomers are people who are born during the increase in birthrates after World War II. Boomer is a term used in place of baby boomers and refers to the demographic cohort of individuals who came to be between the mid-1940s and mid-1960s. This generation precedes Gen X and follows the Silent Generation.

The term was coined in relation to how the population boomed after the second world war. Most newspaper reporters used the name “boom” to refer to the population growth around that time.

Who is a Zoomer?

The first use of the word zoomer is in reference to Generation Z. In light of that, a zoomer is an individual who belongs to the demographic cohort that came to be between the mid-1990s and mid-2000’s. Little consensus exists on the actual dates though, but demographers and researchers put them at between 1995 and 2010.

The second application is that a zoomer is a boomer with a Zip. The difference between zoomers and boomers, as put across by Dr. David Demko shows that a zoomer is the opposite of a ‘traditional boomer’ who does not act their age but live their life.

According to Demko, a zoomer is a boomer, but their traits set them apart. Demko writes that a zoomer is one who:

Let us delve into the difference between boomers and zoomers (the boomers with a Zip).

Difference Between Boomers and Zoomers

Origin of the name

The name boomers was used by different personalities including newspaper reporters who used it in their stories after World War II. However, it is majorly associated with authors William Strauss and Neil Howe while zoomer was coined by gerontologist and journalist David Demko.

Boomers and zoomers have varying attitudes towards various issues. On aging, for example, a boomer regards it as an inevitable process that they cannot do anything about it. Zoomers, on the other hand, view aging with a different angle and aim at squeezing every possible drop from their lives regardless of the age.

Financial Discipline of Boomers Vs. Zoomers

Traditional boomers are not good at planning for retirement and are poor in saving for such issues like healthcare while zoomers can plan for about 80 per cent of their income. The zoomers also have a hedge against inflation as well as money for their healthcare needs.

A zoomer is well aware of diet, setting goals, nutrition, as well as being knowledgeable and engaged to maximize their lifespan. A boomer, on the other hand, is more inclined to just accepting that health and strength are subject to change due to aging. 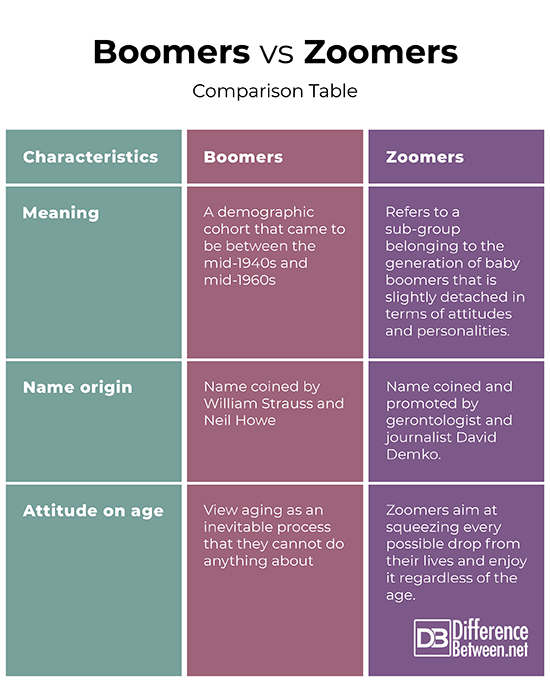 Summary of Boomers Vs. Zoomers

A zoomer is a boomer only that they have detached themselves from the bigger and traditional generation of baby boomers. The way they see and respond to situations, aging, their attitudes, personalities, and such other considerations as financial disciplines vary. However, as Demko put it, a zoomer is anyone born between 1946 and 1964 (when boomers were born), but with the varied traits, they become boomers with Zip.