Difference Between Sedantary and Nomadic 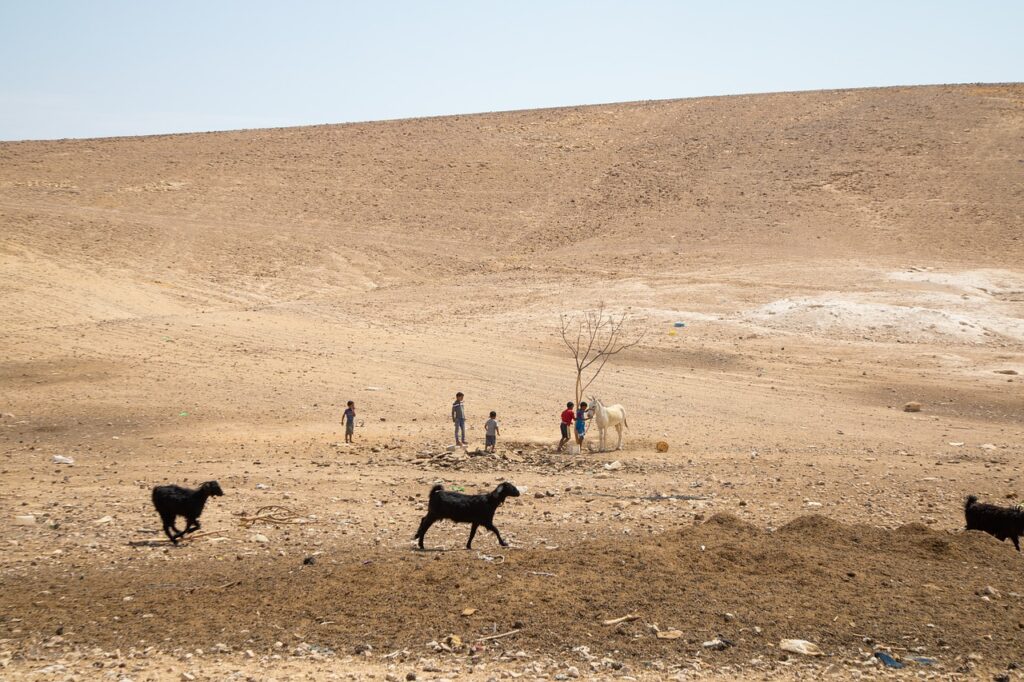 A sedentary lifestyle is one in which people spend most, if not all, of the year in one area for long periods of time. Most well-known sedentary societies have been agricultural societies, but sedentary hunter-gatherer societies are also common in history and in the archaeological record. A lifeway defined by sedentary living is often referred to as sedentism.

It is not known when the first permanent settlements emerged.  Houses made of mammoth bones, for example, have been found in Eurasia that date to as early as 20,000 years ago. Furthermore, humans have built temporary shelters throughout history and prehistory. The first permanent structures appear to have been built as public structures rather than as residences. These include Gobekli Tepe and the tower of Jericho. It is possible that these structures were ritual centers where otherwise mobile societies gathered.

The earliest evidence of true sedentism dates to about 12,000 years ago in the ancient Near East with the Natufians. The Natufians were a hunter-gatherer population represented by the Natufian archaeological culture. By 10,500 years ago, this lifestyle had grown into agrarianism and led to what were likely the first true farming societies. The emergence of sedentism is often associated with the rise of agriculture. Permanent agricultural settlements also appear independently in South America, North America, Africa, and China early in the archaeological record. This indicates that there was not one location from which civilization flowered. People seemed to have independently arrived at the idea in many different parts of the world.

A transition to a settled lifestyle has a significant effect on a society’s economy, food production, socio-political structure, and health conditions. Examples of traits associated with sedentary societies include agriculture, large populations, craft specialization, social inequality, and slavery. None of these, however, necessarily require a sedentary lifestyle and they are not required for sedentary living. Living in one location can also lead to reliance on less diverse sources of food. This consequence of sedentary living combined with high population growth can lead to unhealthy conditions and the spread of disease in densely populated settled communities.

Most people living in the world today practice a sedentary way of life. This trend is likely to continue as cities become larger and the percentage of the global population that lives in cities increases.

A nomadic lifestyle is a lifestyle defined by mobility. A nomadic lifestyle, or nomadism, does not imply random or undirected movement but movement based on access to food supply and other resources. Nomads will travel between specific areas which have the necessary food and natural resources for them to survive. There are several different types of nomadism, three of them are hunter-gatherer nomadism, pastoral nomadism, and tinker and trader nomadism.

Before about 12,000 years ago, it is likely that most, if not all, humans were nomadic hunter-gatherers. Hunting and gathering typically involve some degree of nomadism, but the degree to which hunter-gatherers are nomadic varies from community to community. The Kalahari San, for example, move daily form place to place. Other hunter-gatherers may only move a couple times a year. Because nomadism favors low numbers, nomadic hunter-gatherers will space apart births to avoid adding too many people to a group. They tend to consist of small bands traveling to find food and water.

Many nomadic groups will raise livestock. Pastoral nomads migrate to find grazing land and water for their animals. Nomadic pastoralists typically also practice a form of agriculture or hunting and gathering to supplement their diet. Other pastoralists will trade with agriculturalists to gain access to grain.

One specific form of nomadism is transhumance. Transhumance is the practice of migrating between higher and lower altitudes, or latitudes in some cases, at different times of the year. Transhumant groups will typically migrate to higher elevation during the summer so their livestock can graze and then move back down to the lowlands during the winter when the mountains are not suitable for grazing. The Kohistani of central Asia, one example of a transhumant group, migrate between 600 m and 4,300 m in elevation throughout the year. Kohistani families have at least four or five houses throughout the year. At any given time of the year, the entire population will be at a particular altitude level consistent with the season.

Another type of nomad is the nomad that lives an itinerant lifestyle within a larger society that may or may not be nomadic. These nomads will usually make a living as traveling artisans or laborers. A well-known nomadic group of this sort is the Roma, also known as the Gypsies. The Roma are a nomadic people that originated in northern India but are now known all over the world. The Roma have practiced this form of nomadism for centuries, traveling to distant lands and finding work that supported their itinerant lifestyle. Historically, the men would typically work as livestock traders, traveling craftsmen, and musicians. The women would tell fortunes, sell potions, and work as entertainers. Nomads of this sort are often misunderstood and not trusted by the host society and often become scapegoats and targets of persecution and expulsion.

Modern trends such as urbanization, the development land for agriculture, urban development and industry, and the enforcement of political boundaries between nation-states will likely make the nomadic lifestyle more difficult in the 21st century. Some nomadic groups still exist, but this ancient way of life may become increasingly more difficult as the world becomes smaller. Unless humans begin to leave Earth’s surface and become interplanetary or interstellar wanderers, the future of the nomadic lifestyle is uncertain.

Similarities between Sedentary and Nomadic

Sedentary and nomadic lifestyles are similar in that both can involve agriculture, pastoralism, or hunting and gathering.

Differences between Sedentary and Nomadic

Although there are similarities between sedentary and nomadic lifestyles, there are also important differences. These include the following.

The sedentary lifestyle is a lifestyle defined by staying in the same location for all, or at least most, of the year. Sedentism has its origins about 12,000 years ago and arose independently in many parts of the world including the ancient Near East, China, and Mesoamerica. The sedentary lifestyle is typically associated with agriculture, social stratification, slavery, craft specialization, and population growth. It is likely to become more common. A nomadic lifestyle is defined by periodic movement of a population. The earliest human societies were likely nomadic societies. There are three types of nomadic societies, hunter-gatherer nomads, pastoral nomads, and tinker and trader nomads. Tinker and trader nomads differ from the other nomadic groups in that they live in host societies that may or may not be nomadic themselves. Nomadic societies and sedentary societies are similar in that they both can accommodate hunter-gatherer, pastoral, and agricultural lifestyles. They also differ in important ways. Nomadic societies tend to restrict population growth, focus on a variety of food sources, tend to be more egalitarian, and date to the earliest phase of human prehistory. On the other hand, sedentary societies tend to encourage population growth, focus narrowly on fewer food sources, tend towards greater social stratification, and only date to within the past 12,000 years.