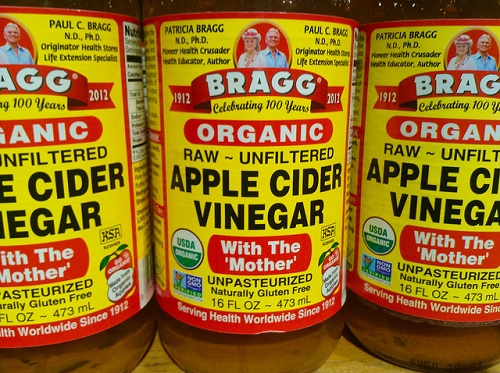 Apple cider vinegar, known as ACV or cider vinegar, is made from apples that have undergone two processes of fermentation.
In its final form, apple cider vinegar has a pale to medium amber color with a very sour taste. The vinegar is used in various recipes as a dressing, marinade, vinaigrette, and food preservative. It is also utilized as an alternative medicine or nutritional supplement for conditions such as acne, allergies, arthritis, chronic fatigue syndrome, diabetes, flu, gout, heartburn, high cholesterol, and sore throat.

Apple cider vinegar begins as extracted apple juice from crushed apples. Bacteria and yeast are added to break the apple’s sugars into alcohol – this is the first fermentation. The second fermentation occurs when the alcohol is fermented once again to become vinegar with aerobic bacteria, which form the acetic acid and give the liquid its sour taste.

Though apple cider vinegar is very beneficial to the health, many people don’t exactly like its taste in an undiluted state. It is not pleasant to drink in its natural form since it is acidic. It is recommended that the vinegar should be taken diluted with water or any kind of sweetener to ease the taste and ingestion of the liquid.

Aside from its culinary and medicinal uses, apple cider vinegar is also used as a homemade household cleaner. Because it is mostly an acid, it can be used as a body deodorant and a heavy-duty jewelry cleaner. It can fend off odors, shine metals like gold, and clean up grime, grease, and dirt deposits.

Apple cider vinegar as a supplement can take various forms. The regular form is the liquid, which can be drunk with or without water or sugar. There are also apple cider vinegar pills, capsules, and tablets, which are very convenient to ingest, although there is some suspicion in terms of their quality.