Difference Between Fettuccine and Linguine 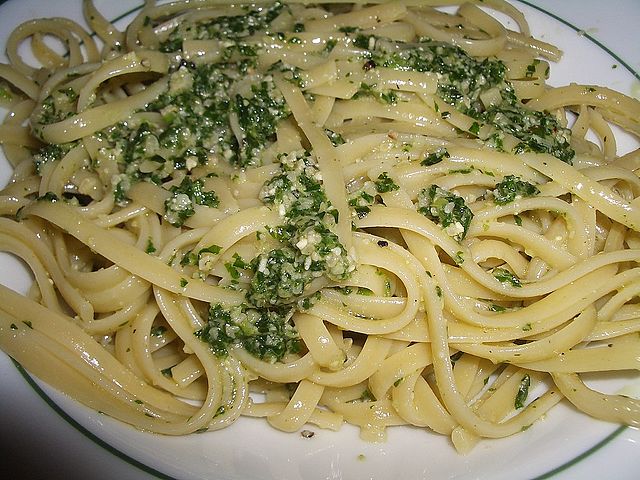 It is common to hear people say that we eat to live. We need a proper diet for the functioning of our body and hence the 3 meals that we normally take. In today’s world, however, with the availability of artificial spices, recipes and cooking methods and equipment, it is possible to cook some very tasty items. In different parts of the world, people prepare and consume different types of foods which are specific to their cultures, traditions, regions, etc. In some cases, the same dish is has two different names owing to the varying regions in which it is prepared. Some such region specific dishes include pasta, linguine, fettuccine etc. In this article, we shall focus on fettuccine and linguine and differentiate them after describing each one.

Fettuccine is one of the various types of pasta. It is a very popular dish in the Roman cuisine. To prepare fettuccine, egg and flour are used primarily and the end result is a dish that resembles noodles which are flat and thick. The proportion in which these two ingredients are used is one egg for every 100 grams of flour. It is usually wider than the tagliatelle typical of Bologna but more or less similar to it. The normal practice is to make fettuccine fresh whether it is prepared at home or commercially. In addition to this, dried fettuccine is also available and can be bought from shops.

Linguine is also a form of pasta just like trenette and fettuccine but what makes it unique is the fact that it is not flat but elliptical in section. It is wider than spaghetti and is about 4 mm. However, it is not as wide as fettuccine. The word meaning of linguine is little tongues in Italian. The words trenette and bavette are also used for linguine. When the prepared linguine is thinner than normal, it is referred to as linguettine.

How are the two different?

In the description of the two, we mentioned that both, linguine and fettuccine are forms of pastas. However, owing to some significant differences between the two, they are not the same. To begin with, fettuccine is flatter than linguine. Fettuccine is also much wider when compared to linguine. It must be noted that how much more flat and wide fettuccine is than linguine depends totally on the one who prepares it; in different recipes or in different parts of the world, the difference could easily vary.

Moving on, since linguine is narrow when compared to fettuccine, it is also more delicate. This is an important difference because the thicker the pasta, the heavier the sauces and chunkier the ingredients that can be used with it. Similarly, if a pasta is delicate, then the common practice is to use smooth and thinner sauces so as to maintain its consistency. For the same reason, fettuccine can accommodate heavy sauces such as cream as well as thick sauces such as Bolognese etc. The much so heavy sauce, carbonara, which consists of bacon, egg and cream can also be used! Also, the chicken used in the pasta also has to be cut or shredded accordingly. Larger chunks can be used in fettuccine whereas very small chunks should be prepared if linguine is to be made. Moreover, broccoli is commonly used with fettuccine but for linguine, thawed, drained spinach is the better option.