Difference Between Coke and Pepsi 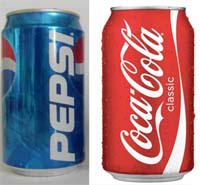 We often have a Pepsi or a Coke when we have lunch, hang out with friends, or even just simply when watching the television. Sometimes we go in for the taste, sometimes for the sheer pleasure of gulping it down, and may be even due to its popularity. Though many are not choosy, some prefer to have only one out of the drinks mostly.

The first way to distinguish between a can of coke and Pepsi is the brand color. Cokes come in red cans, while Pepsi comes in blue cans. Though the drink has the same color, the branding is always in the specified red and blue colors.

The tastes of both the drinks are distinct and it is easy to make out the difference. Pepsi is a little more sweet in taste than the coke. This is due to the addition of the artificial sweeteners to it. You will be able to make it right when you take a sip of the drink. The additions of the sweeteners leave a mild chemical taste after you drink it. Compared to Pepsi, coke does not have that chemical after taste owing to the less artificial sweeteners added. When you drink coke you feel more of that cola flavor in it, while with Pepsi, you get a fruity or fluid sort of taste.

The carbonation levels of both the drinks also are different. It is higher in coke. So when you take the first sip of the coke, you get that fizzy effect. This frizz is less in Pepsi. The fizzy nature can be identified by the bubbles formed when you first open the bottle or just simply shake. It is more in the coke. And you do get that bubbly taste down your throat with a Pepsi. Coke is smoother. The bubbles disappear quickly as the fizz escapes from the coke.

When it comes to the branding part, the logo of coke has not varied much since its inception. May be a minor change in the font is all what changed. This has helped it to stay on in the minds of people. But Pepsi, on the other hand, has come up with various logos and slogans. This kept on changing almost yearly. Though the company and market analysts claim that this is in tune with the changing trends in the society, many do not accept this. Each time they see a new logo, they are afraid to try it thinking that the whole drink has changed.

Summary:
1.Pepsi uses blue color for branding and Coke uses red.
2.Pepsi is sweeter than coke.
3.The carbonization level is higher in Coke than Pepsi.
4.The branding techniques are used more by Pepsi Company than the Coke.