Difference Between VPS and Dedicated Server 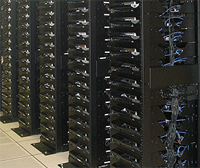 A dedicated server is the traditional method of hosting any type of server. In this set-up, each server is run on its separate hardware installation and does not share any resource with other servers. A virtual private server or VPS is a method of hosting where multiple servers are running on a single hardware installation. This is achieved with some virtualization software that runs on top of the machines operating system. Other operating systems are then run on top of the virtualization software.

VPS makes it possible for hosting providers to offer lower prices than traditional dedicated server. This is because they do not have to buy as many server machines which cost a lot. They can also save on the licensing fees of software that charges depending on the number of processors being used and not on how many users. This is possible because not all servers maximize the use of the machine’s resources, but might prove problematic when multiple servers on the same machine experiences heavy load.

VPS adds an additional layer of complexity compared to dedicated servers. The hosting provider needs to employ IT personnel who are knowledgeable with virtualization as it is necessary to set-up and maintain the virtualization software that runs each server. The virtualization software also takes up processing power as it needs to relay the communications between each server and the underlying hardware. Improvements in the software has reduced the amount of overhead but this is always present regardless of how advanced the technology becomes.

VPS servers on the same machine might also be vulnerable to problems from one computer. Although there are measures implemented to prevent the possibility of the machine crashing due to problems on one server, on the rare chance that it does happen, all the servers on the same machine would also go down. This does not happen on dedicated servers as they operate on independent hardware and a single server going down would not affect others.