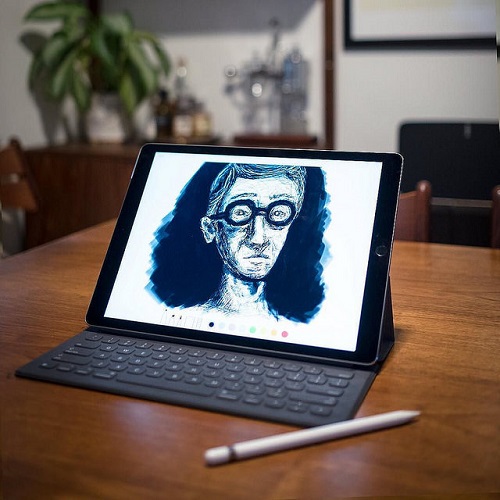 Before the Pro line, the iPad line-up was all about the 7.9-inch Mini and the 9.7-inch Air. It was the perfect tablet which managed to create a striking balance between a compact tablet and something on the productive side. Its air-thin design makes it an easy carry, making it feel like you’re holding a softcover book.

The iPad Air 2 maintains a perfect balance of size and weight, making it a complete package. The first best thing that catches the eye is its thickness, which is obviously the key feature of the Air. It weighs just 437 grams, and adding to its beauty is its streamlined design, which surely puts the tablet in the premium category.

Just when we thought things couldn’t get any better, the company announced the next Apple iPad Pro 10.5, along with the new and improved iPad Pro 12.9. The company has made quite some improvements over the years in its iPad line-up in terms of design, if you compare the new iPad Pro models with the original iPad Pro 9.7.

Technically, the new iPad Pro line is the company’s biggest update since the launch of the iPad Pro 9.7, especially the 12.9 version, which is a monster in every way. The world witnessed a new breed of the iPad which is bigger and faster in every aspect. Vivid display, better storage options, superb cameras, and faster processor – all in a compact package.

The iPad Pro comes in two screen size options: 10.5-inch and 12.9-inch. The second generation of iPad Air, on the other hand, is available in 9.7-inch screen size.

Inside the hood, the iPad Pro packs the advanced A10X Fusion Forth-Generation chip with 64-bit desktop-class architecture and embedded with Apple M10 co-processor, which makes the iPad Pro insanely faster and efficient than its predecessors. The iPad Air, on the other hand, packs the Apple A8X chip with 64-bit architecture and Apple M8 motion co-processor.

Both the variants – the 10.5 and 12.9 inch – come built-in with 4GB LPDDR4 RAM which means better performance as compared to the iPad Air which packs only 2GB LPDDR3 RAM. The extra RAM means it will technically wipe the floor for the Air when it comes to multi-tasking.

The biggest differences between the iPad Pro and iPad Air, apart from the display, are in the CPU and memory department. Apple has managed to double the memory size from the 2GB of RAM found in its predecessor, the iPad Air 2, to 4GB found in its latest iPad line. The whopping 4GB of LPDDR4 RAM combined with the company’s latest and advanced A10X Fusion chip makes the new iPad Pro stand apart. The iPad Pro is surely the way to go, if you don’t mind spending a whopping $600 or more on a tablet. Well, for those who don’t want to spend too much money and still want to go for a solid iPad without the bells and whistles, the iPad Air 2 can be a good investment and you won’t be disappointed.

Outside his professional life, Sagar loves to connect with people from different cultures and origin. You can say he is curious by nature. He believes everyone is a learning experience and it brings a certain excitement, kind of a curiosity to keep going. It may feel silly at first, but it loosens you up after a while and makes it easier for you to start conversations with total strangers – that’s what he said."
Latest posts by Sagar Khillar (see all)
Share Tweet Pin Mail
Categories: Gadgets, Tablets
Tags: iPad Air, iPad Pro
previous post Difference Between VoLTE and LTE
next post Difference between Mentoring and Coaching