Difference Between DNA and mRNA

There are two types of nucleic acids found inside the cells of living organisms; DNA and RNA. Both of these have structural and functional differences between them.

DNA
DNA or deoxyribonucleic acid is the basic genetic material of major life forms except the plant viruses, bacteriophage, and a few other viruses in which either the DNA is absent or any variation of the double-stranded DNA is present. In eukaryotic cells, the DNA occurs as a long, double-stranded helical structure present in the nucleus of the cell. Its double-stranded, helical structure was suggested by Watson and Crick.
DNA is composed of three different types of compounds:
Sugar molecule: The molecule present in DNA is a pentose sugar, deoxyribose.
Phosphoric acid
Nitrogenous base

There are a few consistencies present in the structure of DNA which are called the Chargaff’s base ratio. This model proposes that the purines and pyrimidines are present in an equal amount. The amount of adenine is equivalent to the amount of thymine in DNA. It also states that the base ratio (A=T) / (G≡C) may vary in different groups of animals; however, it is constant within a single species.
mRNA 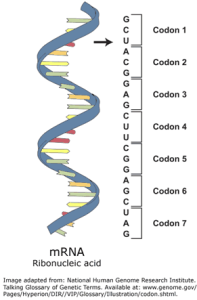 “mRNA” stands for “messenger ribonucleic acid.” It is synthesized in the nucleus as a complementary strand to DNA. mRNA possesses all the basic characteristics of RNA. The composition of RNA is similar to DNA except for a few characteristic differences. The sugar molecule present in RNA is ribose, and among the four nitrogenous bases, thymine is replaced by uracil. In RNA, it is not a necessary factor that purines and pyrimidines are present in equal amounts. Chargaff’s base ratio is also not valid in the case of RNA. RNA is of three types namely; mRNA, rRNA, and tRNA.

mRNA is formed as a complementary strand to one of the two strands of the DNA. So it carries the same information as DNA in that particular part except that in place of thymine, uracil is present. After the synthesis, it immediately moves out of the nucleus into the cytoplasm where it is deposited in some of the ribosomes to help in the process of protein synthesis.
The main function of mRNA is to carry the genetic information from the chromosomal DNA to the cytoplasm for the synthesis of proteins. This is the reason why Jacob and Monad named this kind of RNA as messenger RNA in 1961.
The lifespan of mRNA in the prokaryotic cells is very short. It withers away after a few translations.