Difference between myeloblast and lymphoblast 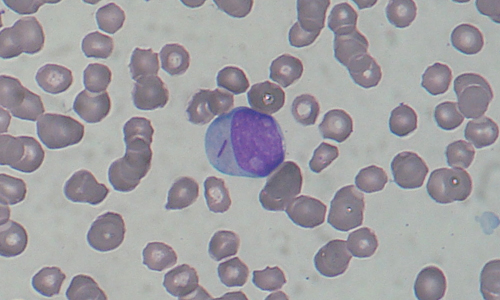 The bone marrow consists of blood cells in an immature form. These are called as  myleoblasts and lymphoblasts.

The size of lymphoblasts is about 15 um diameter where as that of myeloblasts appears to be around 20 um. The cytoplasm is scanty and agranular in lymphoblasts as compared to myleoblasts which is relatively plenty and contains Auer rods which is the hallmark feature for identifying them in a bone marrow smear. Myeloblasts also stain positive for myeloperoxidase stain.

Myeloblasts undergo granulopoesis and develop into granulocytes. The stages consist of development into promyelocyte to myelocyte to metamyelocyte and ultimately into band cells called the basophils, eosinophils and neutrophils.

Lymphoblasts undergo lymphopoesis wherein they mature into either B or T lymphocytes. They either remain in the bone marrow or migrate to the thymus gland in the chest.

Malfunctioning of myeloblasts leads to acute myleoblastic leukemia (AML) a condition where there is accumulation of immature myelocytes in the peripheral blood. This leads to hemopoetic failure. This leads to symptoms of anemia, bleeding from orifices and recurrent infections. It affects individuals from the elderly age group and seldom affects the younger age group.

When there is overproduction of lymphoblasts in the bone marrow, it gives rise to acute lymphocytic leukemia (ALL). In this condition, the chances of recurrent infections such as pneumonia are more pronounced. The patient experiences shortness of breath, giddiness, and generalized weakness. It mostly affects children and is also commonly called as childhood leukemia.

Acute lymphoblastic leukemia (ALL) is classified into L1-L3 types and B-ALL (Burkitt lymphoma). Burkitt’s lymphoma has characteristic kappa/lamda clonal strains. The classification differs based on the amount of cytoplasm and nucleus present in each of them. The L1 and L2 types have scanty cytoplasm where as L3 type has ample cytoplasm with evident vacuoles.

Acute myeloid leukemia (AML) is classified into M1-M4 stages depending on the differentiation of the cells. M1 type has high nucleus to cytoplasm ratio and the color is grayish in appearance. M2- M3 type has Auer rods and the cells appear more mature; known as promyleocytic stage. M4 resembles the earlier stage with more level of differentiation within the cells called as myelocytic differentiation.

The importance of knowing the differences between a myleoblast and lymphoblast is based on the diagnostic point of view in case of a patient with acute leukemia. Here, it becomes necessary for a physician to diagnose the type of leukemia. The differences in the morphology of the two cells visible in the blood smear help him to conclude the same.