Difference between Gonal F and Follistim 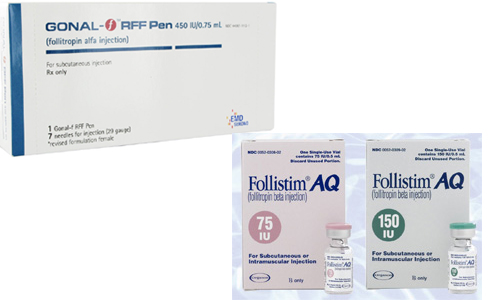 Gonal F and Follistim both are infertility drugs that are used in women wanting children and in whom egg production is supposed to be stimulated through artificial hormone therapy. Gonal F and Follistim both contain artificially synthesized follicle stimulating hormone (FSH) and their structure is very similar to the naturally produced follicle stimulating hormone. Follistim is called as Follistim in the United States of America whereas in other places it is marketed as Puregon.

Gonal F is made of follitrophin alfa which is a synthetic version of follicle stimulating hormone (FSH). Follistim has molecules of both follistrophin alfa and beta.

Gonal F comes in individual vials as well as multi-vial ampoules whereas Follistim comes in individual vials only. Gonal F is available in liquid or powder form as a pre-mixed vial which can be injected subcutaneously and stored at room temperature till 28 days. Follistim is used in the pre-mixed vial form with needle and syringes and Follistim AQ catridge is used in the pen form. They both are created using the DNA recombinant technology.

Gonal F acts by simulating the natural hormone FSH which stimulates production of ova or eggs in females. It enables proliferation of more number of eggs and development and maturation of one egg.

Follistim is used to stimulate egg production in women and to increase the sperm count in males. It is used to develop and mature the eggs as well.

Gonal f is indicated in patients in whom the infertility is purely due to functional causes. It will produce a pregnancy in anovulatory infertile patients by induction of egg production. In men, this drug will cure the infertility due to primary and secondary hypogonadotrophic infertility. Follistim is used in combination with human chorionic gonadotrophin (HCG) and needs repeated levels of hormonal assays and sonography to check the status of the eggs. Follistim is used in cases where there is low sperm count due to lack of hormones. The drug will increase the sperm count and help produce healthy sperms.

Lung and vascular complications are the main drawbacks of using Gonal F as it has produced acute exacerbation of asthma in many patients. Polycystic ovarian disease or PCOD is the main contraindication for this drug. Thromboembolism is another serious contraindication for Gonal F.
Follistim is contraindicated in presence of uncontrolled non- gonadal endocrinopathies and hypersensitivity reactions to drugs like neomycin and streptomycin as there are traces of these drugs present in Follistim. Tumors of ovary, uterus or prostate are contraindications for both the drugs.