Difference Between PowerPC and Intel 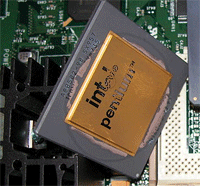 PowerPC has been working side by side particularly with AppleÃ­s products for quite a number of years already, but since Apple made a transition to Intel last 2006, it became one of the major influences that made people to compare the two.

PowerPC is a microprocessor developed mainly by the three developing companies Apple, IBM, and Motorola also known as AIM. It is built with reduced instruction-set computer (RISC) which speeds-up the operation of MIPS (million instructions per second). PowerPC is mainly based on IBM’s earlier Power architecture because it has a similar RISC instruction set for microprocessors. They remain compatible with each other though that the same programs and operating systems can run on both. PowerPC versions exist in both 32-bit and 64-bit platform. PowerPC versions such as G4 and G5 can go up to 2.5 GHz clock speed. The PowerPC provides an alternative to IntelÃ­s popular processors in terms of architecture.

Intel chips have drastically changed over the past fourteen years that loads of Intel family processors have emerged and are highly competitive to other processors. Most of these processors are Nehalem-based. The Intel Core i7 which was first released last 2008 seems to be the fastest so far with maximum clock rate 1.6 GHz Ã± 3.47 GHz. Its Quick Path Interconnect (QPI) architecture provides a point-to-point high speed links that allows a much faster communication between the CPU and other various subsystems. Most of Intel Core i7 has 731 million transistors, 4 core and 8MB of L2 cache.

However, if we deliberate on their power consumption, Intel chips seem to consume more power than PowerPC due to the techniques used to raise the performance and clock speeds. While PowerPC is designed and used in an embedded sector, their power consumption is quite lower. Though Intel is a bit higher in speed, their difference in power consumption seems to be 10X greater. For example, if we take a look on their latest versions, the G4 and G5 consumes about less than 10 watts whereas Intel doesnÃ­t really give out figures rather they only refer to thermal design rating which is around 30 watts or lower than the maximum figure.

One of the reasons why the Apple Company made a transition to Intel is the performance per watt or speed per unit of electrical power provided by Intel. PowerPC probably did not come up with the 3 GHz clock speed requirement of Apple because it wasnÃ­t available. This requirement was intended by Apple for their laptops or MacBooks which have become the fastest growing segment nowadays.