Difference Between Alcoholic and Drunk 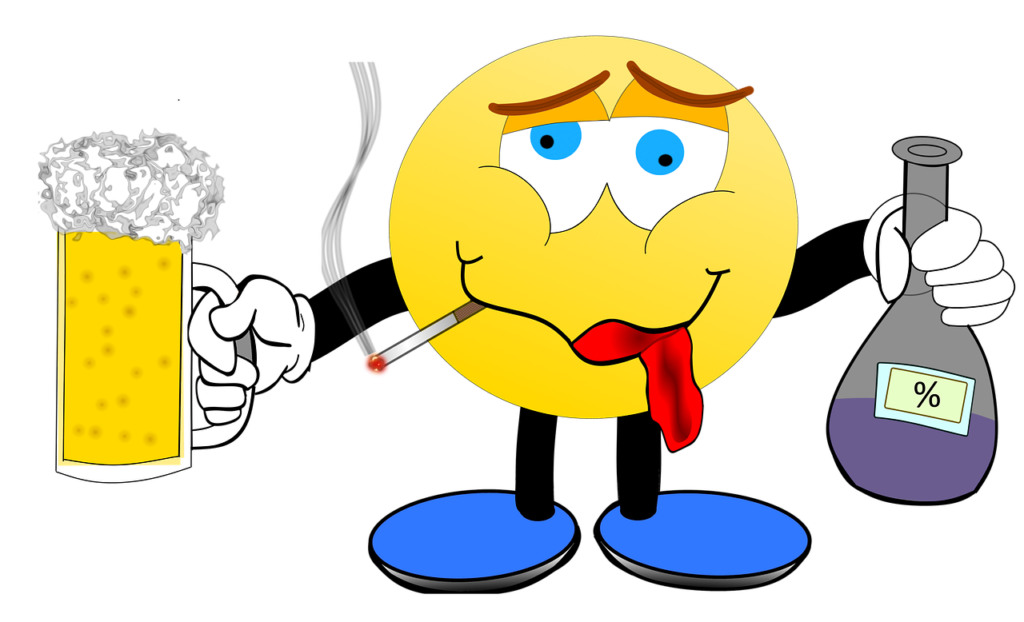 Both terms, alcoholic and drunk basically mean the same. They both refer to an essential thing about someone who is into drinking strong liquids, mostly with alcoholic content.  However, they have wonderful nuances or simply subtle distinctions.

Even though they essentially refer to the same person, their context and situations where they are used are different. Their contexts also affect the inferred meaning and suggested definitions.

All in all, the term alcoholic is subject to discussions. One might call themselves an alcoholic because they probably hate what alcohol at some point did to their moods. It could also be due to the way it altered their behavior, mostly in a negative way.

For purposes of clarity, a more profound analysis of the two terms could help bring out the variances between them. 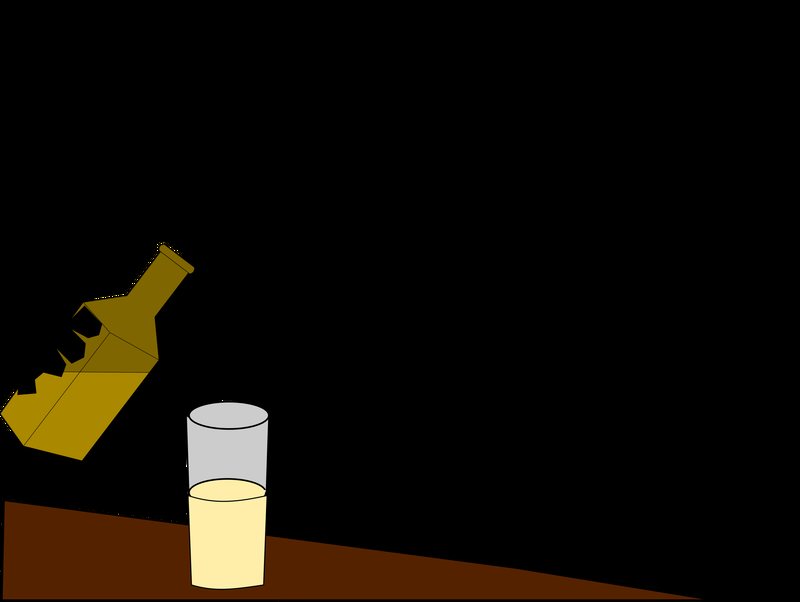 The term is used to refer to someone who is suffering from alcoholism. It also means someone who is a heavy, hard, or serious drinker of an alcoholic substance. Other words regarded as its synonyms are alcohol-abuser, alcohol addict, and dipsomaniac.

An alcoholic has a burning desire to consume alcohol even beyond their capacity to control it. They can drink it regardless of the rules of common sense. In short, alcohol controls them, and they literary cannot regulate how much they consume because their bodies crave for the alcohol in the drink.

Alcoholism is generally taken as a problem with alcohol. Its broad meaning is the uncontrolled and compulsive consumption of alcoholic drinks which harms the drinker’s health, social standing, and personal relationships. Medically, it is considered a disease or an addiction illness.

Characteristics of An Alcoholic

The personal traits of an alcoholic include: 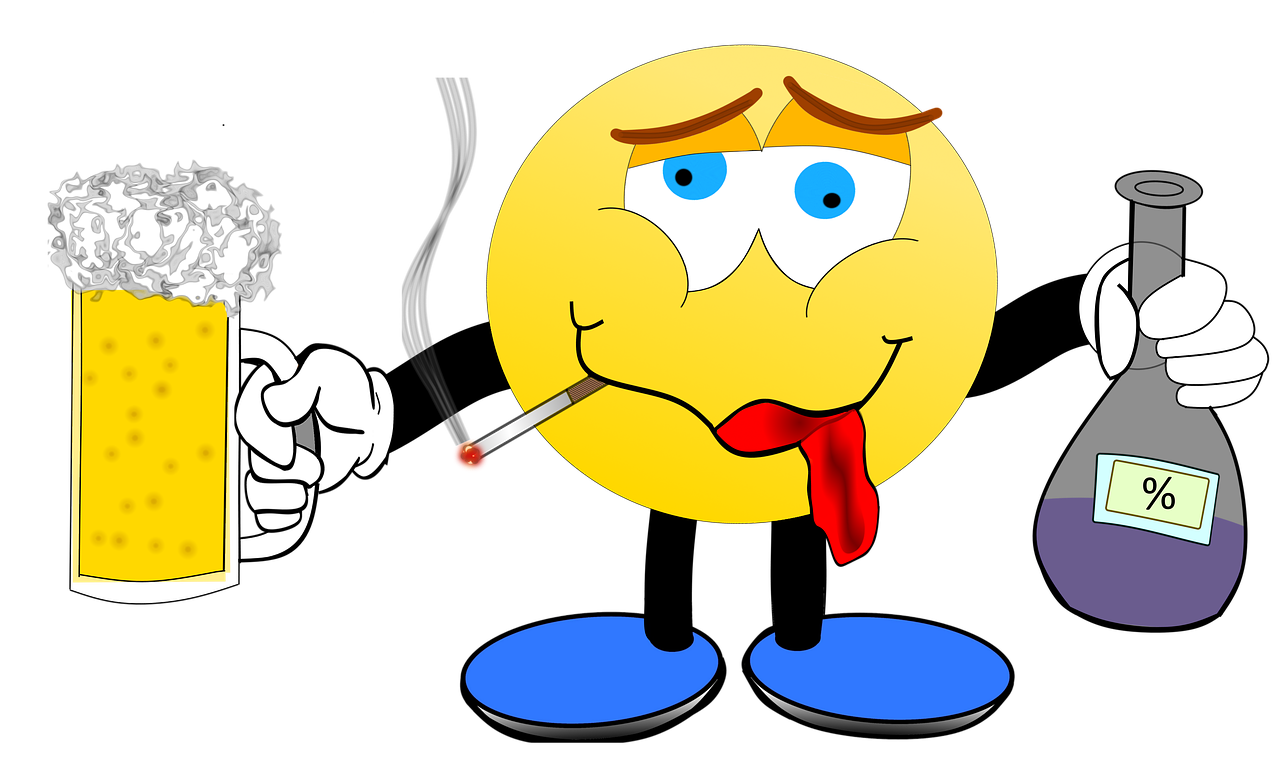 The term drunk is used in reference to an individual who is affected by alcohol. When one is drunk, they lose control of their faculties and behavior. When used as a noun, it refers to a person who is drunk or one who habitually drinks alcoholic substances excessively.

The personal traits of drunks include:

Differences Between Alcoholic and Drunk

Even though the two terms refer to an individual with a drinking problem, there are some thin lines separating them. Their main difference is that a drunk is someone who is intoxicated with alcohol in that they lose control over mental and physical functions. Alcoholic, on the other hand, refers to someone who is affected with alcoholism that it becomes like a disease. The other differences include:

Being an alcoholic means, you are affected by alcoholism and cannot run away from it while being drunk means you are intoxicated with what you are drinking at the time of doing it. When you are drunk, you cannot control your mental and physical functions.

In normal conversations, a drunk is someone who is habitually drunk. An alcoholic, on the other hand, is an individual addicted to alcohol.

Alcoholics need to be drinking continuously for them to feel the effects of the alcohol while drunks usually overconsume the alcohol.

A drunk can go for long periods of time without the desire or need for alcohol, but an alcoholic is in constant need of consuming it.

A drunk is someone, for example, sprouting off in a bar because they took too much alcohol. As such, drunkards do not need to be in that state of inebriation for long. The fact that they are in the state, for now, qualifies them to be drunk. An alcoholic does not necessarily mean someone staggering or sprouting because they took one too many. 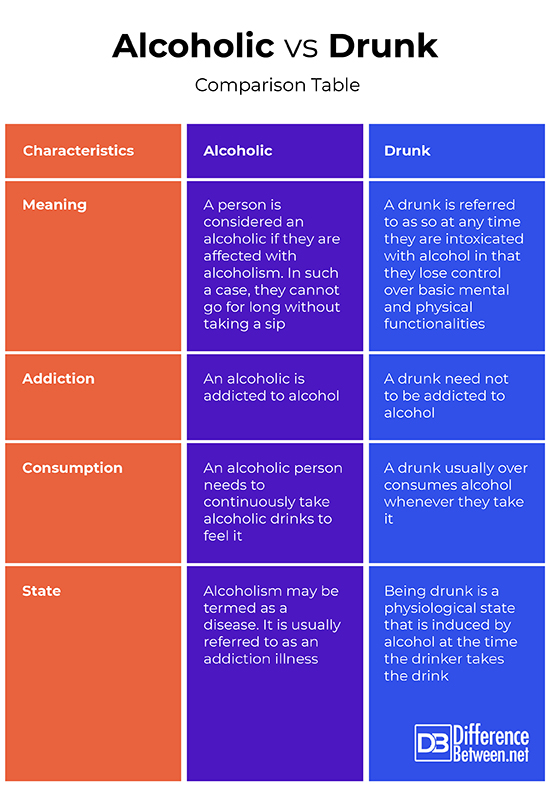 Summary of Alcoholic and Drunk

Clearly, the two terms refer to different people even though they are sometimes used in place of each other. The basic line, however, is that they are both referring to people consuming alcohol. The extent to which they consume it and the aftermath bring out the differences.

Sarah Brown
Sarah Phylis Brown
Origin: Houston, Texas
Education: Master of Fine Arts (M.F.A.) | University of Massachusetts Amherst. She also has Certificate in Statistical Applications. She has written numerous Articles,Blog Posts, Articles, Product Descriptions, Product Reviews, Ghost, Fiction, and Scripts.
She has led a team of experts in establishing the impacts of subsidized sewerage connections in rural slums in Kenya (under the umbrella of the World Bank).
Latest posts by Sarah Brown (see all)
Share Tweet Pin Mail
Categories: Food, Language, Words
Tags: alcoholic, drunk
previous post Difference Between Spearmint and Peppermint
next post Difference Between Me Too and Time’s Up