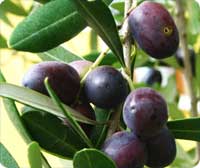 Olive oil is manufactured after crushing and pressing the fruit of olive. Olive oil is used in cosmetics, cooking, pharmaceuticals and soaps. It is often also used as fuel in traditional oil lamps. Olive oil is graded according to quality and its best kind is called Extra Virgin Olive oil. Olive oil is made across the world and used most in the Mediterranean region. The production, quality stands and authenticity of olive oil is monitored by the International Olive Oil Council (IOOC) which is an intergovernmental agency based in Madrid, Spain. The 23 members of the Council account for more than 85 per cent of the olive production in the world.

Olive oil is graded in three ways: Virgin olive oil (produced by only physical processes without any chemical treatment, Refined olive oil (made with chemical treatments to neutralize very strong taste and acidic content, and Pomace (extracted from the olive fruit residue with chemical solvents). This Virgin Oil grading may differ from the retail label of ‘virgin oil’ which may have been put just to indicate that the olive oil in the packaging is of better quality.

The best-graded olive oil is the Extra Virgin Olive oil which has the best flavor, odor and maximum acidity among all kinds of olive oils. In many areas of the world special people are employed to ensure the quality of Extra Virgin Olive oil by rating it on the basis of mouthfeel, aroma and taste. Extra Virgin Oil is considered purer than Fine Virgin Oil and used for salads, stews, soups and other dishes. It is supposed to add a richness and subtle flavor to food that ordinary, semi-fine or pure olive oil does not give. Unlike pomace olive oil, Extra Virgin Oil is not used in soap-making and is intended for human consumption. It is also supposed to be the most beneficial variety of olive oil for preventing heart disease and enhancing health with its antioxidant properties.