Differences between a Swan and a Goose 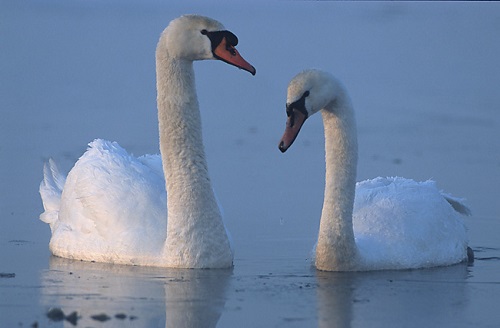 Both the swan and the goose belong to the Anatidae family, whose primary members also includes ducks.i Though they both belong to the same family, it would appear that the swan is much less diverse than the goose. Under its single genus, Cygnus, there are only seven subspecies, whereas the goose is much more diversified with 3 genera and 22 subspecies.

Given the close family relation, their appearance can be similar and it’s easy to confuse one for the other. However, there are a few physical differences. First, geese tend to be smaller than the much larger swans, whose maximum length can be up to six feet. At 35 pounds, the maximum weight for the swan is also substantially bigger than that of the goose.ii Additionally, the coloring on swans tends to typically be completely white or white with some black and in rare instances, all black.iii Geese, on the other hand, tend to be more of a blackish, grey or brown color, with white markings typically found on their belly or lower tail.iv Another noticeable difference is the longer neck of the swan, which has a notable S-shaped curve to it.v This is a feature the goose lacks, as their neck tends to be shorter and straight. Geese also typically have longer legs, despite being smaller in stature.vi

Swans are found all over the world and make their home on any continent, except Antarctica.vii In contrast to this, the goose can only be found in the northern hemisphere, in North America, Europe and Asia.viii Swans also like to reside on rivers, in lakes, ponds, swamps and even moist forest areas.ix Despite their grace in the water, swans tend to be awkward when on land. This is in contrast to the goose, who likes to blend its habitat between water and land, spending time on fields, prairies, the tundra, and forests as well as in ponds, lakes, rivers, streams, inlets, and even oceans.x

Since the swan is mostly an aquatic animal, its diet typically consists of algae, plants, roots, leaves and seeds it can find below the surface of the water. It may even occasionally eat small shellfish, but it seems to prefer a vegetable-based diet. It is only in certain areas or circumstances that a swan will seek food such as grain or corn on land.xi Like swans, geese tend to be herbivores primarily, but their food sources are typically found on land. This includes grasses, roots, leaves, stems and sprouts of plants, rice and corn. Occasionally, geese may also feed on insects or small fish.xii

There are some similarities and differences between the breeding habits of geese and swans as well. Both tend to mate for life, but will find a new mate if their current mate dies.xiii They also tend to return to the area in which they were born to nest.xiv However, the goose typically begins nesting earlier in the year and at an earlier age than the swan. The goose first nests when it is age two and their nesting season occurs from March to May,xv whereas the swan usually first nests at an age of 3 to 7 years old (sometimes, though rarely, they begin at 2) and they will nest during April through July in the northern hemisphere.xvi It also appears that at times, the swan pairs will opt not to live together despite their status as life-long mates, while the goose families do not break up throughout the year and have very strong family units.xvii

The global population of swans and geese are very different also. Swans are much more rarely encountered than geese, and in many cases are considered endangered. The population of North America’s Trumpeter Swan was 46,000 in 2010 which is a dramatic increase from the 3,700 in 1968.xviii This is in sharp contrast to the Canadian goose, also found in North America, whose population is estimated to be nearly 5 million and is so common that it is considered to be an urban pest in some regions.xix The conservation status of the swan is considered “Threatened”xx, whereas that of the goose is “Least Concern.”xxi

Because of their size and habitat difference, the goose and the swan have different natural predators as well. Because they are smaller in size, geese have more predators than a swan does. These would include foxes, wild dogs, raccoons, birds and humans.xxii The largest predator of the swan is the human, who would hunt it for its meat and feathers. Other predators include the wolf and raccoon.xxiii