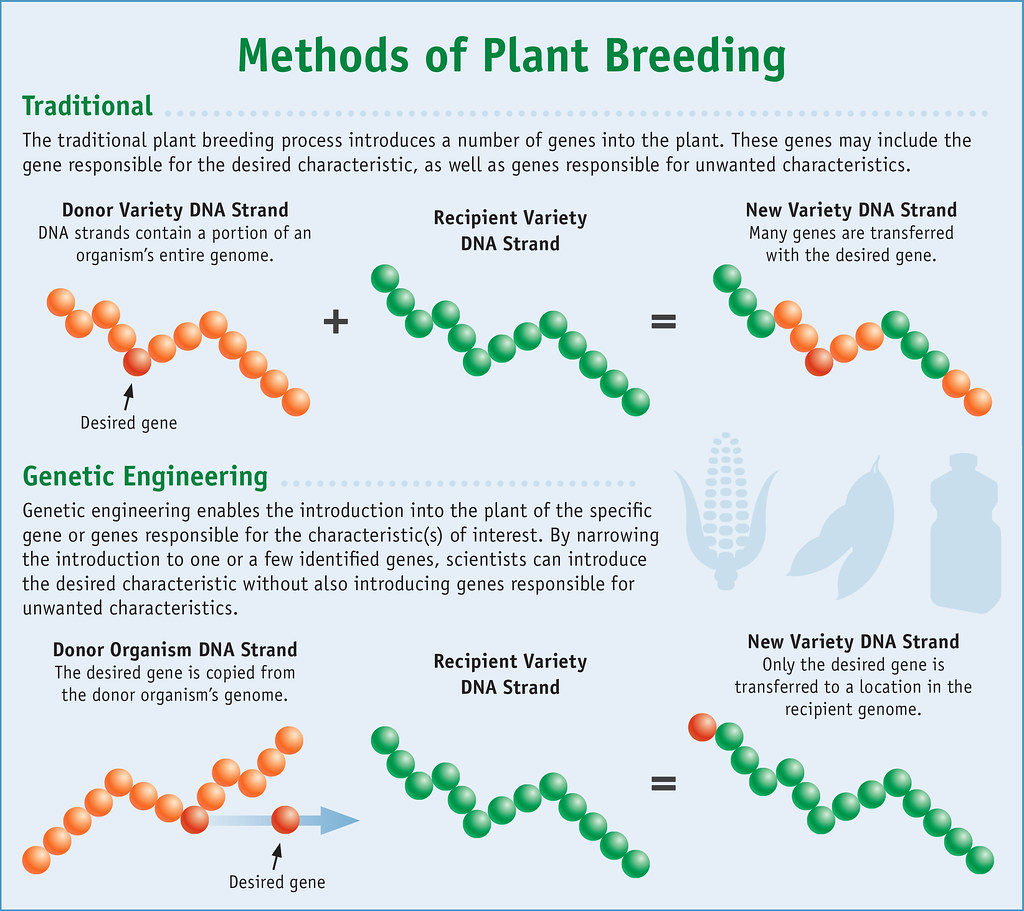 Although several discoveries have been made in biology and technology over the years which ultimately led to its development, the term biotechnology is believed to be first coined by a Hungarian agricultural engineer Karl Ereky in 1919. He built a slaughterhouse and a farm for thousands of pigs, and produced over 100,000 pigs in a year. According to him, biotechnology was the process of upgrading the raw materials biologically into socially useful products. For that, he is regarded by some as the founding father of biotechnology. 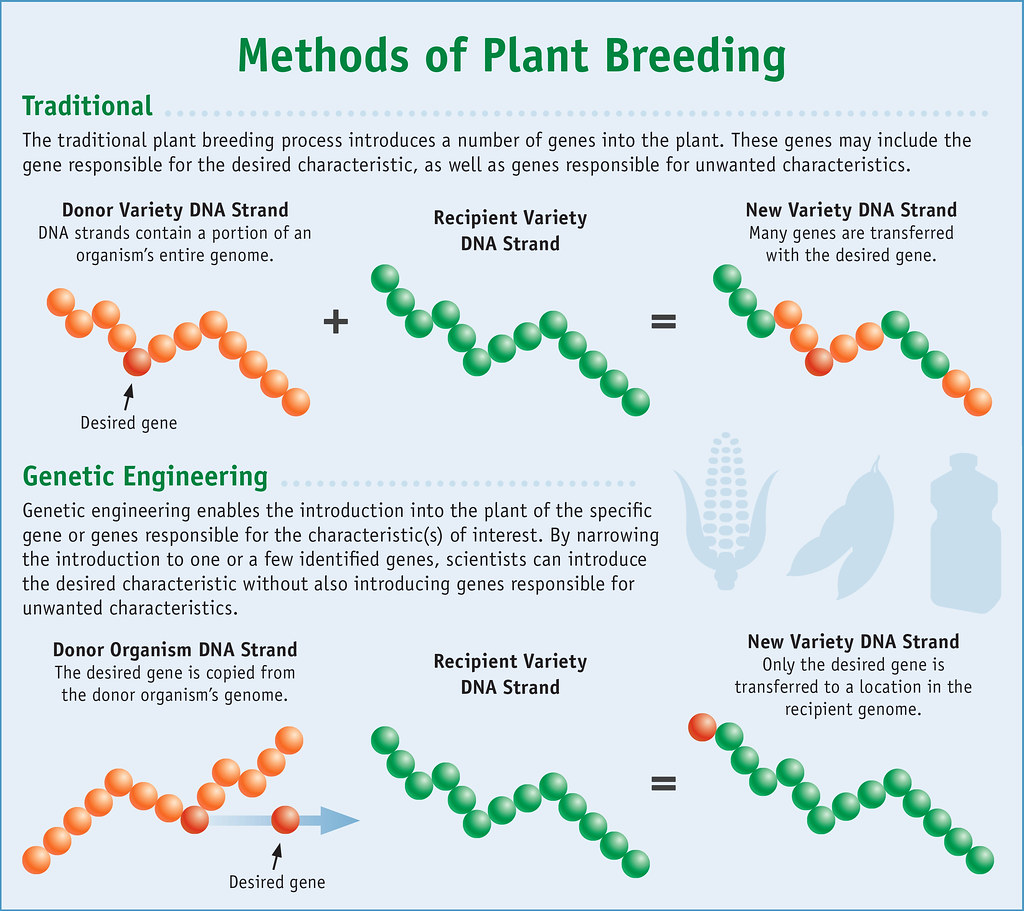 What is Traditional Biotechnology?

What is Modern Biotechnology?

Modern biotechnology involves the use of GE techniques, such as recombinant DNA, functional and structural genomics, DNA diagnostic probes, and other methods for genetic modification. The development of recombinant DNA technology has marked the beginning of so-called modern biotechnology. Modern biotech has contributed significantly to enhancing our knowledge of biological systems. Modern biotechnology techniques are currently being used in many areas such as food, agriculture, forestry, healthcare, environment, minerals, and industrial processes to develop new products and processes. One of the most extensive applications of modern biotech is in agriculture. Recombinant DNA techniques and mutagenesis are used to develop plants with novel traits. Biotech diagnostics have been used to detect a wide variety of diseases and genetic conditions.

Difference between Traditional and Modern Biotech

– Traditional biotech, as the name suggests, refers to the traditional methods of using living organisms to yield new products or modify foods or other useful products for human use. Traditional biotech is based on active techniques which have great efficiency and accuracy. The modern biotechnology shares the same foundation, but it refers to biotechnological techniques for the manipulation of genetic material, cells and living tissues in a controlled environment. Modern biotech involves making products from whole organisms or parts of organisms.

– Traditional biotechnology remains the technology of choice for the most important agronomic traits. Early examples include breeding animals and crops to make cheese, yoghurt, bread, beer and wine. Microorganisms are also used to produce various products such as enzymes for use in laundry detergents. Modern biotechnology is applied in medicine and healthcare in therapeutics, mainly for the discovery, development and production of novel drugs, and in diagnostics, for protein and nucleic acids based tests. Biotechnology applications in the environment focus primarily on using living organisms to treat waste and prevent pollution. 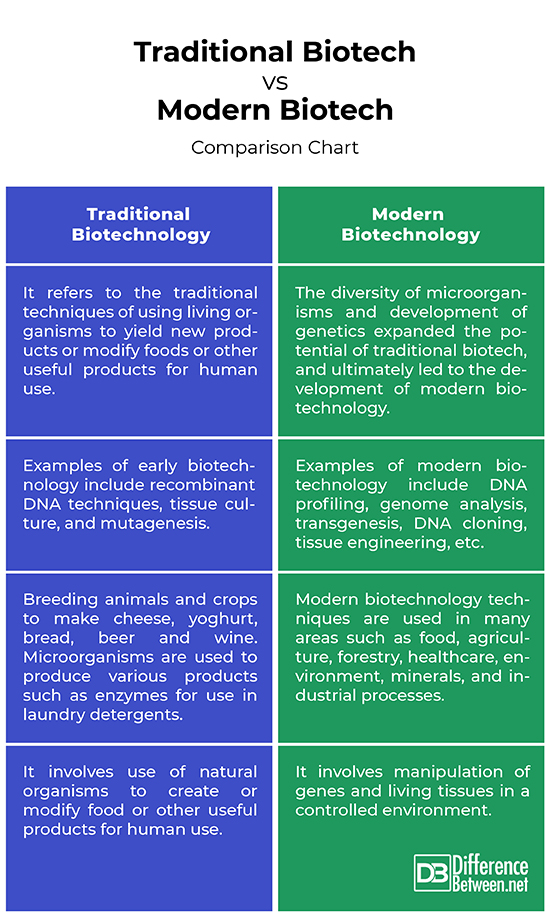 Outside his professional life, Sagar loves to connect with people from different cultures and origin. You can say he is curious by nature. He believes everyone is a learning experience and it brings a certain excitement, kind of a curiosity to keep going. It may feel silly at first, but it loosens you up after a while and makes it easier for you to start conversations with total strangers – that’s what he said."
Latest posts by Sagar Khillar (see all)
Share Tweet Pin Mail
Categories: Biology, Science, Technology
Tags: Modern Biotech, Traditional Biotech
previous post Difference Between Job Title and Occupation
next post Difference Between Nonprofit and Foundation