Difference between Pointer and Reference 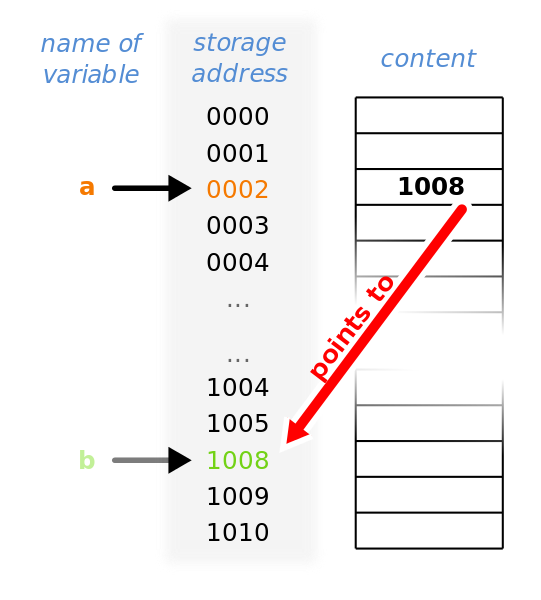 Both pointers and references are the most powerful features in C and C++ which allow programmers to manipulate memory address directly for efficient memory management.

Both are variables that are used to refer to other objects indirectly and they share some common features on the surface. Though they share lots of common capabilities, they are also very complex to understand.

A pointer is a variable that holds the memory address of another variable, whereas a reference is like a pointer that can be used to indirectly refer to another variable.

Most programmers seem to develop some understanding about when to use pointers and when to use references, but they often come across problems the solution of which seems unclear.

What is a Pointer?

Every variable is a memory location which is defined by its address and is paired with an identifier which contains some value that may be changed during the course of a program. In simple terms, variable is a symbol that represents a quantity.

The idea is to use identifiers (or names) instead of numeric addresses to ease the burden of programming thereby reducing complexity of programs. Since these addresses refer to actual locations in the computer memory, pointers can be used to access and manipulate content stored in the memory.

Like any variable or constant, pointers must be declared for their types. Since pointers contain memory addresses that belong to a separate data type, they must be declared using pointers before you can work with them. The general form of a pointer declaration is:

What is a Reference?

A reference is like a pointer with indirect access to a variable. It’s like an alias for another variable, meaning it’s just another name for an already existing variable.

It allows programmers to create a second name for the variable which they can use to manipulate the content stored in that variable. It’s an entity that is an alias for another variable and it has the same address as the original variable. It supports pass-by-reference acting as function formal parameters and once it’s defined to refer to a variable, it cannot be reseated which means it cannot be referred to another variable.

Unlike pointers, they don’t need dereferencing operator to access the value; in fact, they can be used like normal variables.

Here, “ri” is an integer reference initialized to “i”. It declares “ri” as an object of type “reference to int”. A reference can be easily confused with a pointer which is an independent variable, the address values of which cannot be reassigned once created.

Difference between Pointer and Reference

– Both provide almost similar capabilities in terms of usability and the distinction can be tricky. A pointer is just a variable that stores the memory address of another variable, whereas a reference is like an alias for an already existing variable. It creates a second name for a variable that can be used to modify the content stored in that variable.

– Unlike pointers which can be initialized at any time, references must be assigned at initialization. Pointers can be accessed directly, whereas references cannot be directly accessed.

– NULL represents the end of the list which means it indicates the value is unknown and it specifies that variable does not have a valid address space. NULL value can be assigned to a pointer variable directly which suggests it does not point anywhere, whereas NULL cannot be assigned to a reference variable. 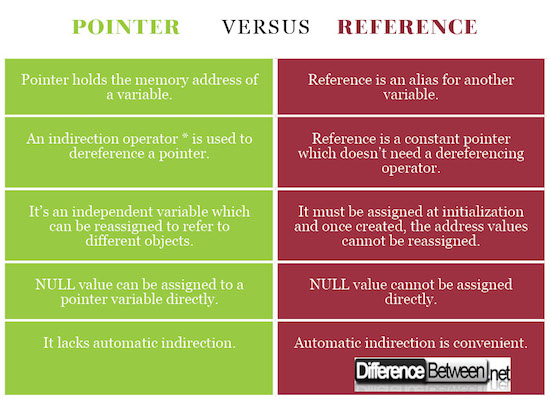 Summary of Pointer vs. Reference

Pointers have always been among the favorite topics of discussion of C/C++ programmers until references came to the picture. References are somewhat similar to pointers but have their fair share of pros and cons in comparison. While both can be used to change local variables of one function within another function, they have their differences. Both are powerful features in C and C++ which allow you to directly manipulate memory, but with a few exceptions. A pointer holds the memory address of a variable, whereas a reference is just an alias for another variable.

Outside his professional life, Sagar loves to connect with people from different cultures and origin. You can say he is curious by nature. He believes everyone is a learning experience and it brings a certain excitement, kind of a curiosity to keep going. It may feel silly at first, but it loosens you up after a while and makes it easier for you to start conversations with total strangers – that’s what he said."
Latest posts by Sagar Khillar (see all)
Share Tweet Pin Mail
Categories: Software, Technology
Tags: Pointer, reference
previous post Difference between LVN and RN
next post Difference between Primary Memory and Secondary Memory