Difference Between Israeli And Palestenian 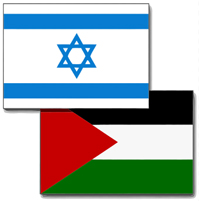 Israeli vs Palestinian
The term Israeli refers to a citizen of Israel which was formed under a United Nations decision in 1947 whereas the term Palestinian refers to the descendants of the families living in the historic Palestine. The PLO defines Palestenians in its constitution as anyone who has been living in Palestine normally till 1947 regardless of whether they were evicted or remained there and any child born of a Palestenian father. Whereas Israelis are citizens of a developed country the Palestenians are stateless and lack the citizenship of any country. The religious affiliations of the Israelis include Christians, Jews, Muslims, Arabs, Druze, etc. The majority of the population of Israelis is Jews comprising almost 82% as per the Central Bureau of Statistics of Israel with the rest being a minority. The Palestinians are mostly Sunni Muslims with a small Christian minority.

The Israeli population is approx 7 Million as of 2009 as per the Central Bureau of Statistics of Israel. The Palestinians are estimated to be approx. 9.6 Million with over half of them being stateless refugees in various countries in the Middle East, Africa and Europe. The rest are living in Palestine. The Palestenian figures are as declared by the Palestenian Central Bureau of Statistics. All of the Israelis are either migrants or descendants of migrants who have moved to the region over the last 2 centuries whereas the Palestinians are actually descendants of people who have been living in Palestine comprising mostly of the West Bank.

The Culture followed by the Israelis is western owing to the influence of the various migrant groups whereas the Palestenian culture is predominantly Arab. Although the same United Nations resolution created 2 states one Jewish and one Arab, the Palestenians have never really been able to exercise sovereignty over their land. Whereas the Israelis have through their grit and determination and also the support of the western countries that played a crucial part in the formation of Israel made it into a developed state and a formidable military force in the region the palestenians have felt oppressed by the Israeli occupation of their lands and continue to fight politically and sometimes militarily with the same determination.