Difference between durum and semolina 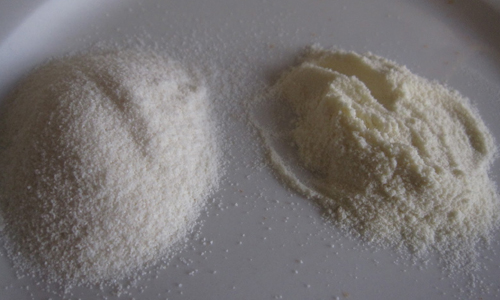 Wheat is the part of the diet of people living in all parts of the world and this is the reason that it is known as a staple food. It is used to make bread that we consume in almost all meals that we have, as well as other important food items. The importance of wheat for our bodily processes cannot be stressed enough; for example the proper functioning of our digestive processes has a lot of dependence on the presence of wheat in our diet. We normally use the word wheat to refer to all its different breeds but few of us know the different breeds by their name or the differences between them. In this article, we will see such breeds of wheat, namely durum and semolina.

Durum wheat, which is also known as macaroni wheat is the only species of wheat that is tetraploid, has commercial significance and is still cultivated today. Other more scientific names used for durum are Triticum turgidum subsp. Durum or merely Triticum durum. This type of wheat was developed by artificially selecting domesticated emmer wheat strains that were previously grown in the central parts of Europe as well as the Near East as early as 7000 BC. Just like the emmer wheat, durum wheat is also awned. Durum is a latin word, and its word meaning is ‘hard’. This species is unique in the sense that it is the hardest of all the wheat species. Moreover, it has a very high protein content and is known to contribute a lot to strength. These are the actual reasons for durum being used in a lot of food items such as for bread making, pasta etc. The latter originated from Italy where it is totally made from durum wheat. In contrast to this, semolina is that wheat which is produced after processing and making certain changes to the durum wheat. The wheat middlings of the durum wheat that are coarse and have been purified are what come under the tag of semolina. These are specifically used in making pasta, puddings, breakfast cereals, couscous etc. Note that the word semolina should not always be associated with wheat but should actually be associated with coarse middings. This is because semolina is also used to describe the coarse middlings of other varieties of wheat, as well as those of other grains, such as rice, maize etc.

These two forms of wheat are different in the textures that they exhibit. Durum has a very fine texture; finer than semolina. It is a powder that is yellow-hued and looks like traditionally used baking flours. As opposed to this, semolina has a heavier texture; more like bread crumbs that are hard. It is coarser than almost all other milled flours. In actuality, durum flour is that fine ground powder that is left after the milling process and is also a product of semolina that can be ground further. The difference in texture means that the two have different uses when preparing meals. The flour of durum has a delicate ground texture and hence creates dough that is quite soft. If you are making pasta using durum wheat then the durum is easily forced through the pasta makers and later curls or bends when it is cooked. Semolina flour on other hand, has a coarse texture and works similar to a composite material. It holds the dough of the pasta together and strengthens it when heated.

Durum is usually used in soft noodle products such as lasagne, spaghetti etc. in order to make the pasta softer and pliable for cooking. Semolina is used more for hard pastas so that they maintain their shape even under strong heat. Foods using semolina include farfalle, rotini, macaroni etc.