Difference Between Forester and Outback 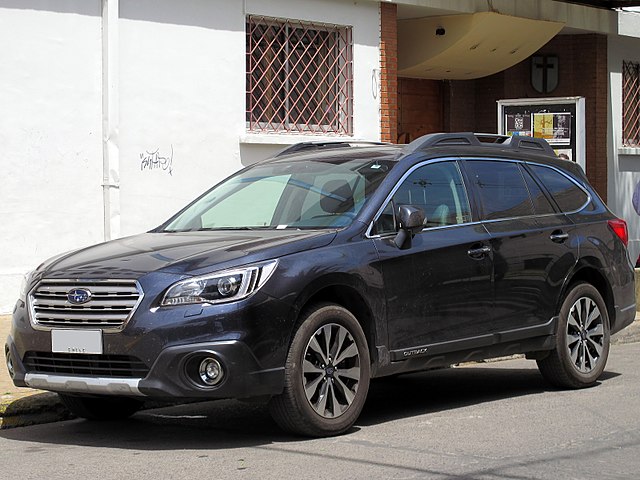 If you’re set on a Subaru and torn between the Forester and the Outback, you’d be overwhelmed by comparing these two top-ranking vehicles on various grounds. Both are direct competitors but they share a lot in common than it seems. We present an unbiased comparison between the two and highlight some key points to help you better understand which one’s a better option for you.

What is Subaru Forester?

The Forester is an all-wheel drive compact crossover SUV manufactured by the Japanese automaker Subaru in 1997. It is based on Subaru’s midsize Legacy sedan and shares its platform with the compact family car Impreza. The second generation Forester was a major design overhaul from its predecessor which managed to combine off-road capabilities with plentiful interior space. The third generation Forester moved away from its conventional station-wagon label to officially become a crossover SUV combined with eco-friendly features. Lots of things have changed in the fourth generation Forester such as Continuously Variable Transmission (CVT), revised suspension, more safety features, driving enhancements, better fuel-efficiency, the X-Mode, and more. Every Forester since 1997 has been designed to provide comfort at its best for every day’s journey. 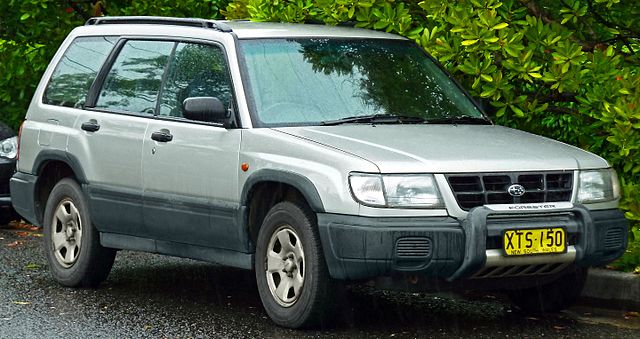 What is Subaru Outback?

The Outback is the Subaru’s number one selling station-wagon turned crossover SUV which sits on the line between the two, which may be the reason for its enduring popularity. It was derived from Subaru’s first generation Legacy wagon. The second generation Legacy became the first generation Outback and was called “Legacy Outback” but lacked the additional ride height found on the later versions. It wasn’t until 1996 that the Outback gained the SUV status by adding partial protective plastic body to the sides for better off-road capabilities along with the raised suspension. The Outback left the Legacy nest with its second generation model which started off on a much better note, especially with the addition of the Sports Utility Sedan (SUS) tag and a raised ride height. The crossover grew even bigger with the fourth generation 2.5-liter turbocharged Outback XT but did not gain as much traction as expected due to the lack of a clutch pedal. It grew bigger when the revamped Outback hit the market in2015.

Difference between Forester and Outback

The Subaru Forester is a compact crossover SUV based on a station-wagon design which continues to hold its own against its other crossover siblings. It’s a standard crossover wagon which shares its platform with Subaru’s compact family sedan Impreza. It strikes a perfect balance between a sleek, modern design and sports utility features with low cost and higher fuel efficiency. The Outback is a mid-size crossover SUV which combines the rugged features of a compact crossover with an all-out comfort of a station-wagon. It is the Subaru’s number-one selling crossover SUV that boasts a symmetrical all-wheel drive with exceptional safety features.

Ride Quality of  Forester and Outback

Comparing the two in terms of ride quality is like comparing the two variants of an all-wheel drive best seller – both are similar in many aspects but with fewer subtle differences. The Outback is essentially a tall-riding car which makes it a little more comfortable to ride, plus the suspension has been tweaked and the excess ride height makes it great for traveling long distances. The Forester is not a tough ride either; in fact, it’s best among the most practical SUVs in the segment. Subaru has gone to great lengths to improve its ride quality and handling, making it a great ride for outdoor enthusiasts and casual riders alike.

Style of Forester and Outback

Although, the Forester was among the first crossover SUVs, it was built in the style of a car but with an all-wheel drive train and a more rugged style. The higher stance with an outstanding outward visibility makes it look more like a sports utility vehicle with more space, more safety features, more versatile, more everything than ever. The Outback is more like a station-wagon but with height of an SUV which makes it the best of both the worlds. It boasts an updated design with a little contemporary touch which makes it more attractive and more comfortable than before.

Engine of Forester and Outback

Safety features in Forester and Outback 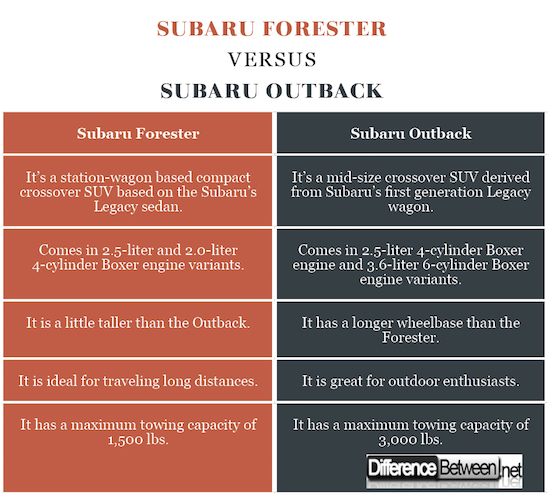 Summary of Forester and Outback

If you prefer station wagons over SUVs, then you’d like the Outback which is one of the top-ranking wagons on the market. It is a wagon version of Subaru’s Legacy with a lift kit and a sleek, modern design. The Forester started off on a wagon’s foot too, but morphed into a compact crossover SUV with exceptional off-road capabilities. Both Outback and Forester comes with all-wheel drive systems which literally direct the engine power to the four wheels for a maximum on and off-road performance. If you crave more power, then the Outback’s top spec 3.6-liter 6-cyliner engine can take you miles. The Forester is more versatile and fuel-efficient, thanks to its standard 4-cylinder Boxer engine.

Outside his professional life, Sagar loves to connect with people from different cultures and origin. You can say he is curious by nature. He believes everyone is a learning experience and it brings a certain excitement, kind of a curiosity to keep going. It may feel silly at first, but it loosens you up after a while and makes it easier for you to start conversations with total strangers – that’s what he said."
Latest posts by Sagar Khillar (see all)
Share Tweet Pin Mail SMS
Categories: Auto, Objects
Tags: Subaru Forester, Subaru Outback
previous post Difference Between First Angle Projection and Third Angle Projection
next post Difference Between Reversible and Irreversible Cell Injury