Difference Between Steelhead and Salmon

Among the most common water species is fish. This is a broad family with hundreds of types of fishes. Some are edible while some are not. Some are extremely big while some are very tiny. Some of the fishes are saltwater while others are anadromous.

Of all the types, two types of fish get to confuse people quite often. These are the steelhead and salmon. Most people interchange the two terms and more often than not, they cannot tell which one is a steelhead and which one is salmon if they had the two on display.

In fact, the two are closely related and have an almost similar taste but still, are different. As a result, this post seeks to gather as much information about the two fish types and lay them down.

What is a Steelhead?

A steelhead is an anadromous form of the Rainbow Trout. It is a salmonid species and found in freshwater tributaries flowing into the Pacific Ocean. It is categorized as anadromous since it migrates from marine to freshwater environments for purposes of spawning.

Steelheads live longer, for up to eight years. They also can spawn for up to three times although most of them do not survive that long, especially the males.

Steelheads get their name from their appearance. They are usually more streamlined in shape with a silvery or brassy color in adults.

What is a Salmon?

Salmon is a name commonly used on several species of ray-finned fishes belonging to the family Salmonidae. Other members of the family are char, trout, whitefish, and grayling. Salmon are natives to the tributaries emptying into the North of the Atlantic Ocean and the Pacific Ocean.

Salmons are also anadromous. They usually hatch in fresh water, migrate to the ocean and then return to the freshwater body to reproduce.

The actual color of a salmon ranges from light orange to almost white. The color variances are dependent on the levels of carotenoid astaxanthin which in turn is influenced by how rich the diet the fish feeds on.

Salmons’ eggs come in different colors. They range from dark reddish-orange to pale yellowish-orange. The colors vary from species and within species. The factors influencing the color variances include sediments composition, water temperature, and age among other factors.

Differences Between Steelhead and Salmon

Even though steelheads and salmons belong to the same fish family of Salmonidae, they have distinctive traits as follows:

Steelheads are silvery or brassy in white while Salmons have a variety of colors ranging from light orange to almost white.

Trout, including Steelheads, have either dark red, pink, or orange colored meat depending on whether the fish is anadromous or farmed. Salmon, on the other hand, have red, gray, and others white meats.

The head of a salmon is sharper while a steelhead’s head is rounder. 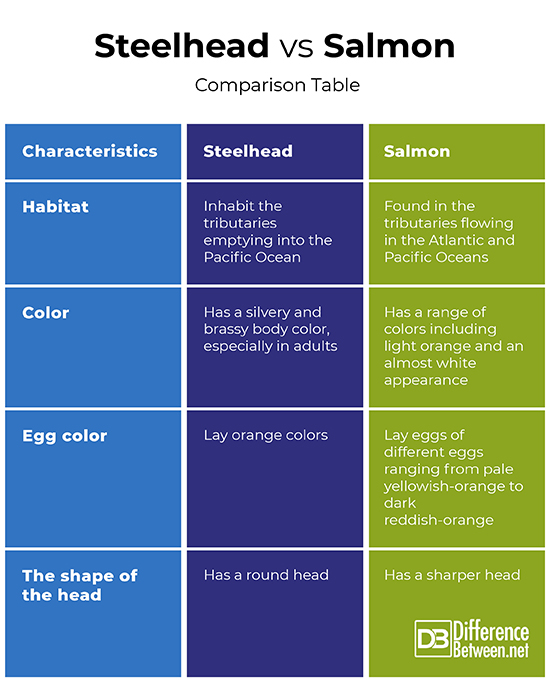 Summary of Steelhead vs. Salmon

There are subtle differences between to the two fish species. The fact that they belong to one family makes it more difficult for people to differentiate them. However, a deeper analysis and study of the two will bring out the distinctive features of each and how one differs from the other.