Difference Between CorelDraw and Photoshop

Visual appeal is one of the fundamental aspects of web design which encompasses everything that meets the eye such as images, banners, buttons, slide shows, text style, color scheme, graphics and more.

These are visual elements that catch the attention of the user and in a way, they connect to the user. Suffice to say, the visual elements and the graphics across the collection of web pages define the boundaries of a full-fledge website. It’s vital to web design because it stimulates aesthetic senses and increases a sense of connection. This is where graphic designers come to the picture.

They are the individuals behind this creative process. The use different graphics design software such as Adobe Photoshop, Adobe Illustrator, CorelDraw, etc. These software programs make it easy for the web designers to design and manipulate images. Let’s take a look at the two and understand the difference. 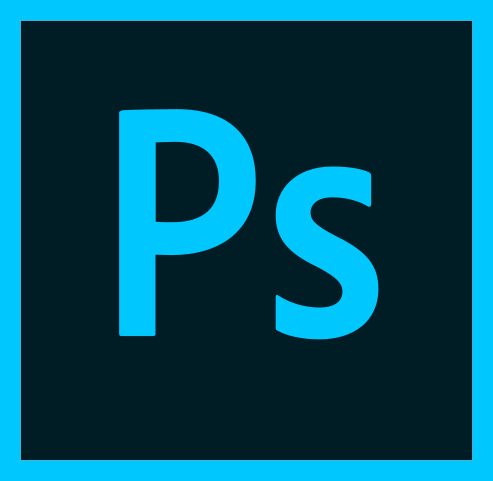 What is Adobe Photoshop?

Photoshop is one of the most elegantly designed and feature-rich image-editing software program developed by Adobe Systems for Mac and Windows operating systems. It is an excellent application specially designed to take your image editing and motion graphics skills to a higher level. It is mostly used by graphics designers and professional photographers alike.

The software is based on raster graphics system meaning it is used to interpret data in pixels. Raster means pixel which is a dot matrix data structure which is basically a sequence of horizontal lines called pixels. It’s one of the common ways to create computer graphics. Photoshop turns vectors, text layers or any kind of graphics into simple bitmap images made of pixels. It is a great tool out of the box used to work with images.

CorelDraw is a window based graphics design software program developed and marketed by Corel Corporation. It is basically a vector graphics editor which creates and edits digital images through a sequence of commands or mathematical equations.

They create computer generated images that are defined in terms of 2D points in order to create images on a raster display. Vector images are constructed using mathematical formulas instead of pixels. It is also one of the bundled image-editing programs in the Corel’s Graphics Suite, along with Corel Photo-Paint, an advanced photo-editing program.

It is mostly used to create vector-based images and illustrations and to design logos, business cards, pamphlets, barcodes, etc.

Difference between CorelDraw and Photoshop

Basics of CorelDraw and Photoshop

Both are the common and widely used graphics design software programs used when it comes to adding visual elements to a website.

Photoshop is an image editing, photo enhancement, and graphics design software developed by Adobe Systems for both Mac and Windows. It is a powerful application mainly used for raster (pixel-based) graphics as well as vector graphics by many professional designers and photographers alike.

CorelDraw is a window-based graphics design application mainly used for vector graphics. It is also one of the image-editing programs in a robust graphics suite called Corel’s Graphics Suite, bundled with Corel Photo-Paint and other graphics-related programs.

Software Type for CorelDraw and Photoshop

While both are common graphics related programs used by designers, they are quite different in their forte. Adobe Photoshop is a raster program that is used to interpret data in pixels and it’s used for almost any kind of image editing, such as creating high-quality graphics, infographics, touchups, presentations, or even creating banners. Photoshop is still one of the best software programs to edit images.

CorelDraw, on the contrary, is vector-based graphics software meaning it uses mathematical equations to create graphics and artwork. It doesn’t understand the idea of pixels.

Use of CorelDraw and Photoshop

To successfully work with vector images without the use of pixels, you will need CorelDraw which specializes in vector art. It is mainly used by creative professional to create and edit vector-based illustrations and images such as designing logos, arranging print layouts, and retouch photographs. It is commonly used to create logos, business cards, hoardings, banners, pamphlets, etc.

All the creative effects are done in Photoshop allowing you to work with images layer by layer for detailed effects and manipulation of images. It also allows users to crop, resize, and correct colors on digital photographs to the precise needs and requirements. 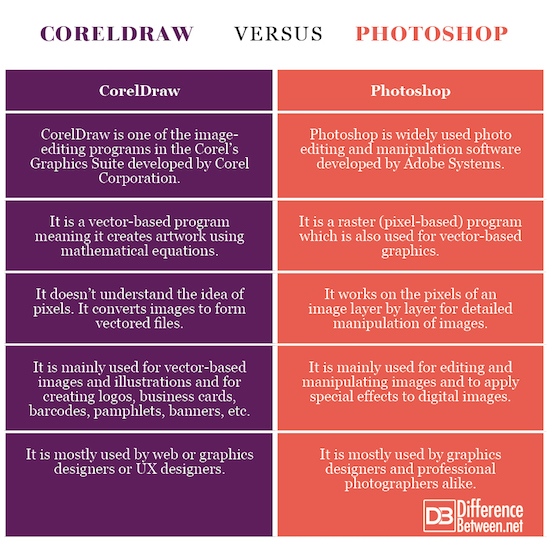 Summary of CorelDraw vs. Photoshop

The main difference between the two is the technology on which they are based upon. Photoshop is an excellent program mainly used for creating images, photo editing, and graphics design or to add special effects to images.

Photoshop is pixel-based, whereas CorelDraw is mainly used for vector-based graphics and is a lot like Adobe Illustrator.

Photoshop is mostly used by web designers and professional photographers alike. CorelDraw, on the contrary, is used to create artwork using mathematical equations instead of using pixels and is used mostly for designing logos, business cards, barcodes, pamphlets, banners, and more.

In a nutshell, both the programs get you to the same place but the idea they are based upon is very different. The Adobe version of CorelDraw is Illustrator.

Outside his professional life, Sagar loves to connect with people from different cultures and origin. You can say he is curious by nature. He believes everyone is a learning experience and it brings a certain excitement, kind of a curiosity to keep going. It may feel silly at first, but it loosens you up after a while and makes it easier for you to start conversations with total strangers – that’s what he said."
Latest posts by Sagar Khillar (see all)
Share Tweet Pin Mail
Categories: Software, Technology
Tags: CorelDraw, photoshop
previous post Difference Between Hand and Arm
next post Difference Between Brushed Motors and Brushless Motors