Difference Between Google WiFi and Eero 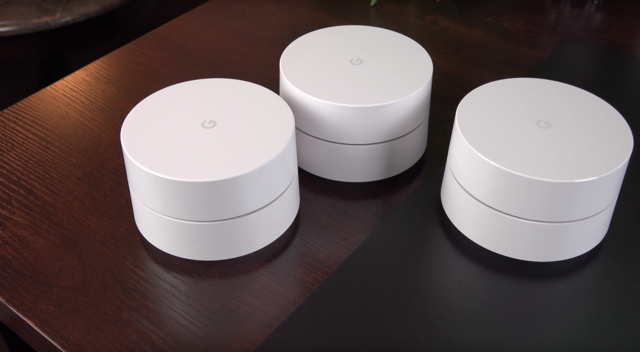 We live in a connected world now, where we and our devices are all connected – without wires. We have become free and our devices we so rely on today are now completely wire-free. Even household appliances are wireless now. Connecting without wires was a distant future back then when free WiFi was just a dream and now we have WiFi almost everywhere we go. WiFi was once a fantasy and now it’s everywhere. The term WiFi is mainly used to indicate wireless connectivity. The term does not have a specific definition but was rather a marketing takeoff created from the term HiFi, which was used for high-fidelity audio recordings when vinyl records became commonplace in the 1950s.

The most recent development in the WiFi system is the mesh technology. It’s a local network topology that allows users to have multiple connection points throughout the home or building, with each connection point communicating with the others. It’s more like a collection of small routers that communicate with each other to expand the existing WiFi network to reach every corner of the house or building. This effectively spreads the wireless signal throughout the home or building. The best examples of residential mesh systems are Google WiFi and Eero. They are the top contenders of the mesh WiFi network competition. Let’s find out which one is perfect for your home.

What is Google WiFi?

Google WiFi is a home mesh Wi-Fi system developed by Google. It is a new kind of Wi-Fi router designed to provide enhanced Wi-Fi coverage throughout your home. Announced on 4 Oct. 2016, Google WiFi provides a seamless, reliable wireless coverage with consistently high-quality Wi-Fi, replacing your traditional wireless router. Each Wi-Fi access point supports both access and transmission capabilities. The access capabilities provide connectivity to the end users, as is the case with conventional Wi-Fi access points, and the transmission capabilities allow each access point to interact with other access points within close proximity. As a result, you get a fast, reliable Wi-Fi coverage throughout your house, without worrying about losing the signal. 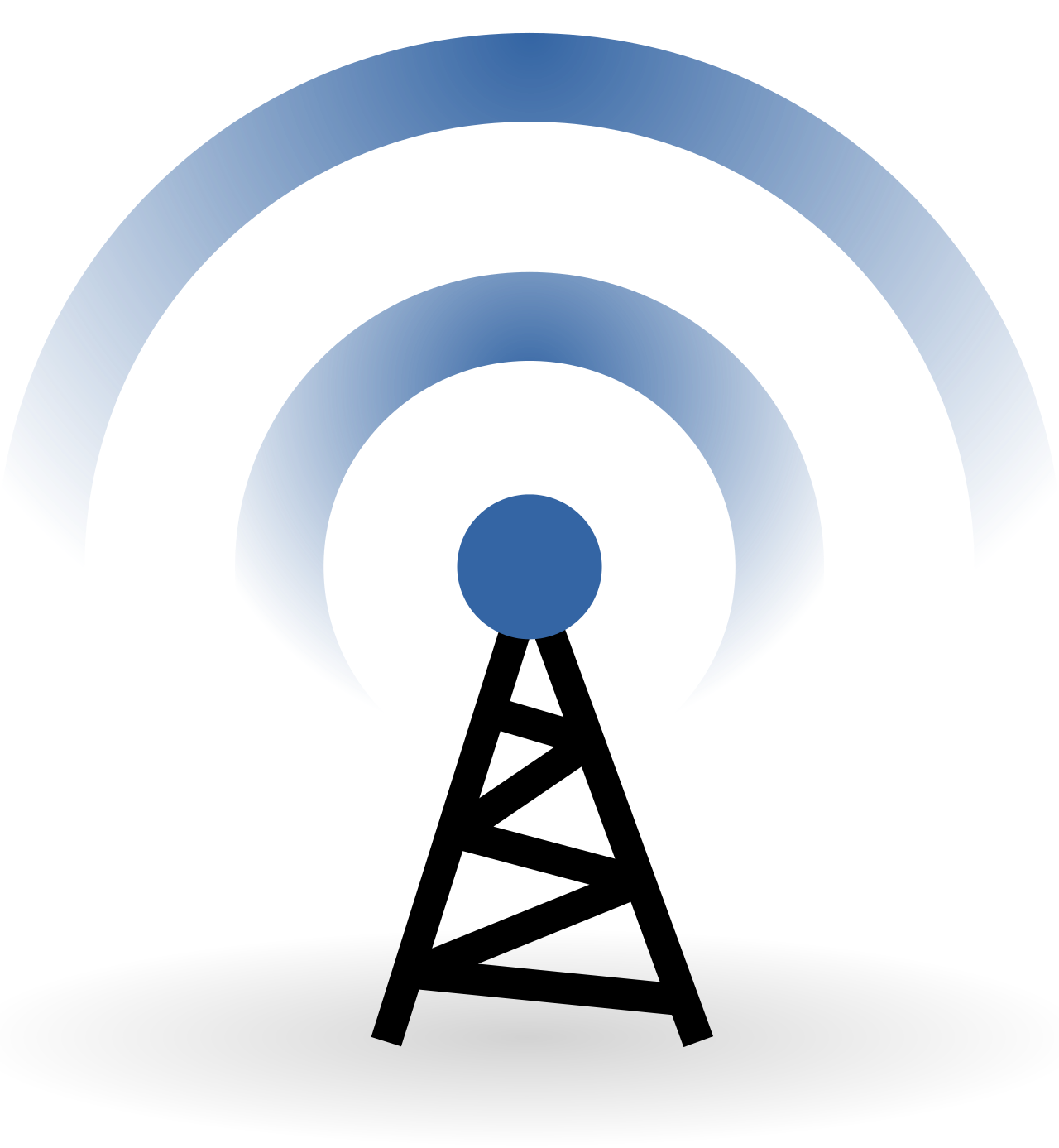 Eero is yet another home mesh Wi-Fi system that uses multiple access points that delivers super fast Wi-Fi coverage to every room in your house – all on a single network. Developed by eero inc., eero is the world’s first residential mesh Wi-Fi system that eliminates the need of any wireless router and Wi-Fi range extender for your home, providing a seamless, reliable internet access throughout your house without any signal drop. The eero router is a combination of three identical hardware units – you need to connect one unit to your main modem and place the other two around your house, within wireless range of each other. The eero is tri-band and offers up to 240 Mbps over 2.4 GHz and 600 Mbps over 5 GHz. And the best part, it can effectively steer backhaul traffic through appropriate nodes.

Difference between Google WiFi and Eero

– Google WiFi and Eero are the two top contenders in the residential mesh Wi-Fi network competition and the most popular Wi-Fi mesh systems on the market. While both have been around for quite some time, Eero was one of the first to bring the mesh system to home and the Google’s global recognition helped keep the mesh technology expanding when it began to stagnate. However, both are great mesh systems that provide a fast, reliable internet access throughout your house without failing.

– The first generation Eero was a pack of three identical units, each with a rectangular case and soft rounded corners complimented by a glossy white finish. The second generation Eero looks virtually identical to the first one, keeping the same minimalistic design. However, the new beacon is a bit different now and it goes into an electricity outlet now, rather than sitting idle on a flat surface. Google WiFi also features the same minimalist, low-profile form factor with the same cylindrical design, but small and unobtrusive.

– While both Google WiFi and Eero offer all the basic networking control like access control, easy setup, guest networks, and more, there are some differences when it comes to connectivity. The eero features a tri-band setup with simultaneous 2.4 GHz, 5.2 GHz, and 5.8 GHz IEEE 802.11a/b/g/n/ac bands. This allows the system to tap the full potential of the 2.4 GHz and 5 GHz bands. Google WiFi, on the other hand, offers a dual-band setup with 2.4 GHz and 5 GHz 802.11ac bands.

– On the inside, both Google WiFi and Eero share almost the same hardware with Quad-core ARM CPU and 512MB of RAM. However, the Google WiFi costs significantly less for a 3 pack at $299, while it costs $129 for a single pack. Eero, on the other hand, costs $199 for a single unit or $499 for the complete pack which includes the whole eero home mesh system with 1 eero and 2 eero beacons. Google WiFi costs $200 less than the Eero, which is slightly overpriced compared to Google’s offerings, but provides a complete mesh network. 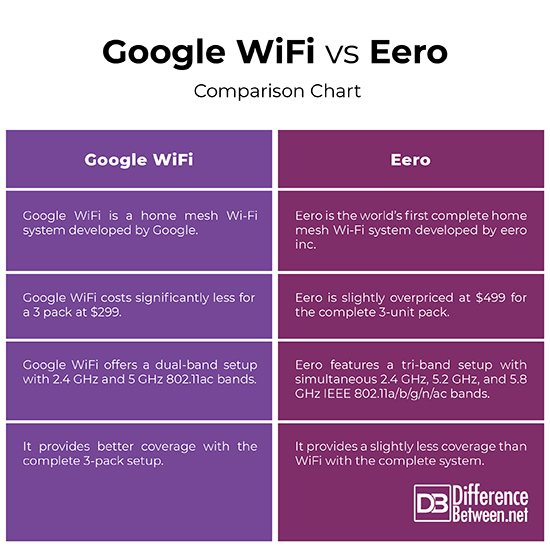 Summary of Google WiFi vs. Eero

Both Google WiFi and Eero are the top contenders of the mesh WiFi network competition that have their fair share of differences. Google offers a better value product, but Eero provides a complete home mesh system. Well, both are really good products that provide a fast, reliable internet access throughout your house without any signal drop, allowing you to roam around seamlessly. Deciding which mesh network system to choose from, at the end of the day, comes down to personal preference, whether you choose to pay the full price up front for the Google WiFi or opt for a rather monthly plan with Eero.

Outside his professional life, Sagar loves to connect with people from different cultures and origin. You can say he is curious by nature. He believes everyone is a learning experience and it brings a certain excitement, kind of a curiosity to keep going. It may feel silly at first, but it loosens you up after a while and makes it easier for you to start conversations with total strangers – that’s what he said."
Latest posts by Sagar Khillar (see all)
Share Tweet Pin Mail
Categories: Communication, internet, Technology
Tags: Eero, Google WiFi
previous post Difference Between T-Mobile and Verizon
next post Difference Between MarkTen Elite and Juul