Difference Between IEnumerable and IEnumerator 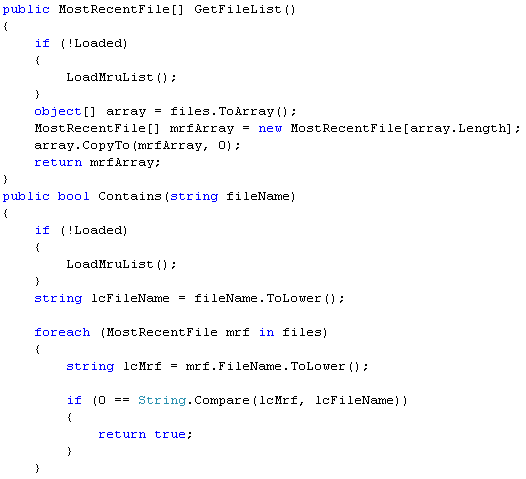 Before we jump into the difference between IEnumerable and IEnumerator, let us first understand the terms Enumerator and Enumerable and when and why to use them.

Enumerable is a module used in the Array class that gives you Enumerator. The class itself doesn’t each method. In fact, it uses a method called ‘GetEnumerator’ that gives you an Enumerator to retrieve its item.

An Enumerator is an object that returns each item in a collection in a specific order, exactly as they are requested. The compiler generates code that uses an Enumerator, when you write a foreach loop in C#.

IEnumerator is an interface implemented by an enumerator and the enumerable class implements the IEnumerable interface.

IEnumerable is a basic interface used to obtain an object that knows how to enumerate (or iterate) over the elements in the collection.

It’s an implementation of the iterator pattern that provides a mechanism to traverse an object in the collection regardless of its internal structure. The IEnumerable interface represents an object that can be iterated over in a collection.

It uses only one method “GetEnumerator” that returns an enumerator class instance that implement IEnumerator interface.

The IEnumerator interface, one the other hand, declares two methods – Reset ( ) and MoveNext ( ) – and one property, Current. The MoveNext ( ) returns a Boolean vale that indicates the end of the list and helps position the first element in the list after calling the Reset ( ) method – it set the enumerator to its default position so that to re-iterate the list from the beginning.

The Current property can only be called through an instance of the IEnumerator interface and it returns the current element in the list.

Difference between IEnumerable and IEnumerator

Basics of IEnumerable and Ienumerator

IEnumerable interface defines only one method GetEnumerator ( ) which is an instance method used on several different collection types. It gets an IEnumerator iterator that can be used to iterate over all the values from the collection. When you write a foreach loop in C# the code it generates calls the GetEnumerator method to create the Enumerator used by the loop.

IEnumerable is a generic interface that provides an abstraction for looping over elements and by implementing the IEnumerable interface, a generic class essentially enables iteration via the IEnumerator interface. In doing so, these classes end up providing a common interface to retrieve an instance of an IEnumerator <T> object that supports all the basic set of navigation methods.

Functionality of IEnumerable and IEnumerator 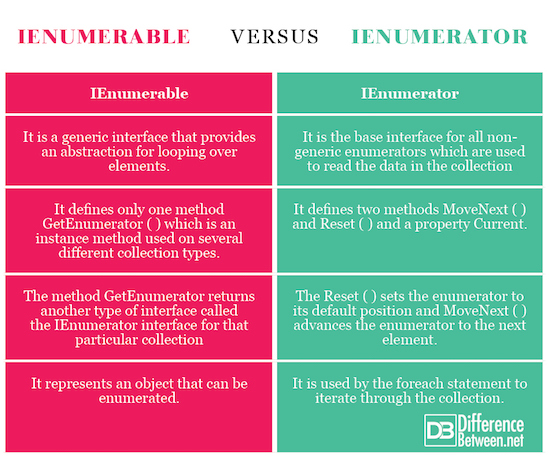 Outside his professional life, Sagar loves to connect with people from different cultures and origin. You can say he is curious by nature. He believes everyone is a learning experience and it brings a certain excitement, kind of a curiosity to keep going. It may feel silly at first, but it loosens you up after a while and makes it easier for you to start conversations with total strangers – that’s what he said."
Latest posts by Sagar Khillar (see all)
Share Tweet Pin Mail SMS
Categories: Technology
Tags: IEnumerable, IEnumerator
previous post Difference Between Feminist and Equalist
next post Difference Between Basal Cell and Squamous Cell Carcinoma