Difference Between .NET and ASP.NET 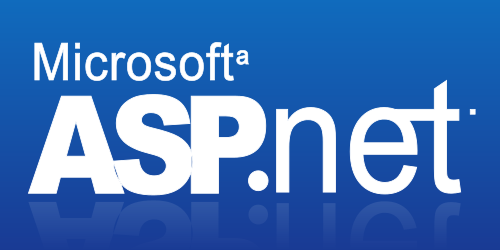 For years, developers have been using .NET (pronounced as DOT NET) framework to create, run and deploy desktop applications and server based applications. Developed by Microsoft, NET framework runs primarily on Microsoft Windows platform. ASP.NET is a web application framework which is part of the .NET framework based on an object-oriented and event-driven programming model to the world of Web development. ASP.NET is a great tool for building websites which can dramatically simplify the structure and creation of web applications. One of its biggest selling points is its flexibility and object-oriented features which makes ASP.NET an ideal choice for developing .NET Application development.

The Net Framework (pronounced as dot net) is a software development framework that integrates a number of technologies emerged from Microsoft during the late 1990s to create, run, and deploy a wide range of web services and web and Windows applications. It is a framework for managed code and assemblies that simplifies the development of robust client/server and multi-tier applications. Because of its flexibility, it allows the development of scalable enterprise and business applications without writing code to manage transaction, pooling, or security.

The ASP.NET is a part of .NET Framework used to create dynamic web pages. It is the next stage in the evolution of Microsoft’s server-side technologies and the successor to the classic ASP. It is fully integrated with the .NET Framework that simplifies the tasks of developing, debugging, and deploying web applications. The ASP.NET applications have full unrestricted access to all of the .NET classes and features. The applications are largely component-based and are built on top of the common language runtime (CLR) and can be written in any of the languages compliant with .NET.

Difference between .NET and ASP.NET

NET Framework (pronounced as dot net) is a development framework that provides programming guidelines and programming interface to Windows services and APIs. It is a software development platform developed by Microsoft to create, run and deploy a wide range of applications from web to mobile to Windows-based applications. The main strategy of .NET is to enable software as a service, but it’s more than that. ASP.NET, on the other hand, is the main tool in the .NET Framework that plays a key role in the Microsoft’s .NET strategy. ASP.NET simplifies the tasks of creating, debugging and deploying web applications.

The .NET Framework is a managed environment and a revolutionary platform used to create, run, and deploy applications and services that use .NET technologies and CLR is the core runtime engine that monitors the execution of .NET applications. It is basically a development and runtime infrastructure that changes the development of business applications on the Windows platform. The architecture of ASP.NET is based on the following key components: Language, Library, and Common Language Runtime (CLR). The ASP.NET applications are largely component-based and modularized.

Previously, .NET could be used only for Windows and PC users, but now provides a new programming interface to Windows services and APIs and integrates a number of technologies to develop a wide range of applications from Windows-based applications to web and mobile applications. It simplifies the development of robust client/server and multi-tier applications. ASP.NET, on the other hand, is a web application part of .NET Framework used to create websites that are data-driven and dynamic, that scale well, and that work well across a broad range of websites without any custom coding by the developer. 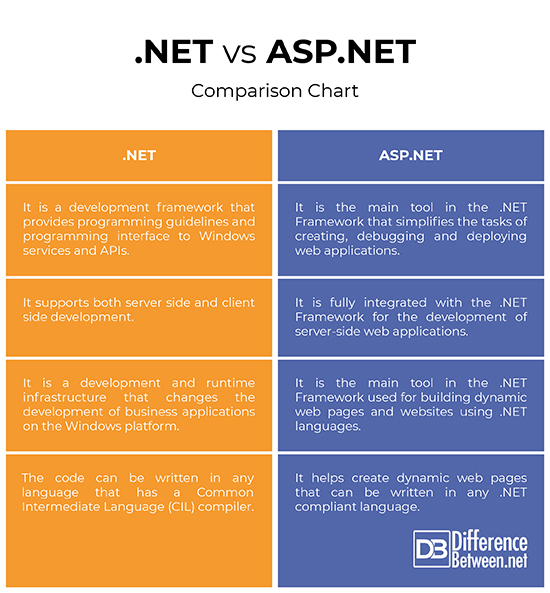 Summary of .NET Vs. ASP.NET

In a nutshell, the .NET Framework is a software framework developed by Microsoft to create, run and deploy desktop applications and server based applications, whereas ASP.NET is the extension of the ASP which is part of the .NET Framework that simplifies the structure and creation of web applications. One of the biggest advantages of ASP.NET is its flexibility and object-oriented features. The ASP.NET applications are built on top of the CLR and can be written in any of the .NET compliant languages. In simple terms, ASP.NET is a software framework that allows you to use the. NET platform and its supporting languages to develop web applications.

Outside his professional life, Sagar loves to connect with people from different cultures and origin. You can say he is curious by nature. He believes everyone is a learning experience and it brings a certain excitement, kind of a curiosity to keep going. It may feel silly at first, but it loosens you up after a while and makes it easier for you to start conversations with total strangers – that’s what he said."
Latest posts by Sagar Khillar (see all)
Share Tweet Pin Mail
Categories: Software, Technology, Web Applications
Tags: ASP.NET, net
previous post Difference Between Periods and Groups
next post Difference Between Gold and Gold Plated