Difference Between Congruent and Similarity 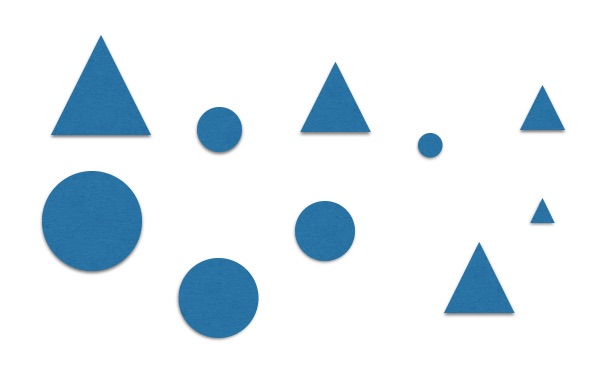 The difference between congruent and similarity can be understood through the world of mathematics.  Shape, proportion and angles all play their part in defining these two words.

Congruent shapes have identical measurements and coincide with each other when superimposed. Two congruent objects are the same size and shape, but their orientation or placing in a space can be different.  This does not change the fact that they are the same because they possess the same physical properties, the same angles as well as the same measurements.

Similarity means closely resembling each other but not quite the same.  Mathematically a shape can be similar in its basic shape, a circle for example, but different in size.  The difference in size aspect means that a similar shape can never be congruent.

The word congruent comes from the Latin word ‘congruo’ which means ‘I agree’.  When two objects are congruent they can be matched or mapped exactly to each other.  They are the same size and have the same shape.  They fit into the ‘s.s.s theorem’ of side/side/side/ all three sides are the same and all three of the angles are the same. They can be superimposed on one another but can be set differently in terms of their orientation on a plane or in a 3D space.

In a 3D space they may have different special co-ordinates and be orientated differently round their XYZ axes.  However, they are still congruent because all their sides are equal.  All their angles are equal, and their shape is the same.   The art of mapping two congruent shapes is based on the translation, rotation and reflection of the shape and the shape should be able to move through different angles or turn over to be mapped exactly.

Congruent objects are exact in measurement and shape and size.  At first glance to the uninformed the two compared shapes may appear to be different because of the way they have been placed.  However, when they are mapped or rotated they are exact replicas of each other and therefore will be congruent.

The word similarity comes from the Latin ‘similis’ which means like, resembling or similar.  Similarity in the mathematical world requires two objects to have the same shape but not necessarily the same size.

Two different circles for instance are both circles and therefore similar but their size makes them different.  They can be compared as similar shapes, but not mapped to one another. Two objects that are similar will have the same shape but the one could be a scaled up or a scaled down version of the other.  The orientation of the shape could be different, but they will remain similar.  Mathematically objects are similar if they have the same shape but not necessarily the same size.

Word usage.  How do we use these two words out of the mathematical context?

There are many instances where similarity is used to describe everyday things and a likeness to almost everything that you could possibly compare.  Objects can be similar, experiences could be similar, the natural world has many similarities and conversations could also be thought to be similar.  Similarity is a word used in the work place and at home.

Congruent is not so widely used out of mathematical or formal informative types of writing.  Congruent is about matching and agreeing on ideas and principles especially in law and politics.  Synonyms suggested for congruent include conforming, identical and consistent.  All of  these words reflect the controlled and formal aspect of congruent.  When thoughts can be coincident and superposable they are thought to be congruent.

Congruence can refer to harmony and compatibility in the musical world.  The lyrics, video and view of a scene, all projecting the same theme, could be described as congruent ideals.  They fit together to make the same whole idea or thought.  This would be a more abstract use of the word congruent as it is perceived to show the same qualities of an idea, design or art form in unison.

The antonyms suggested for congruence include inharmonious and disagreeable which further suggests that to be congruent, outside of mathematical circles, one needs to be totally in tune with the thoughts and ideals and principles that are being implemented.  Due to its formal attributes and mathematical structure congruent is not used as much in day to day conversation.

Similarities are found often in the way we speak, and the word is used in numerous situations because it is more open-ended and adaptable.

Similarities are found in instances where comparing two objects could be very closely compared, for instance Siamese twins would be very similar and definitely appear to be identical.  Similarities will be corresponding in their meaning like synonyms as they have a similar aspects and purpose. Synonyms are useful words that contribute to the diversity of our language and descriptions of people places and things.  Similarities can relate to nature and have a natural connection in their surroundings. Leaves on the same tree for example would be similar but could be different colours in autumn.  Objects that are akin to one another are similar in quantity and character. Groups of objects or classes of animals can be similar.  Cats for example are all cats, but their breed and colour and habitat would make them similar in different ways, but not the same and never congruent.

In the mathematical field of specific numbers and geometric figures the term congruent is used with precision and set measurements.  The figures are accurate and although the placing of the congruent object may appear to be different, the object itself is never different but always exactly the same.  It may appear to be different to the eye initially because of the way it is positioned in space, but when it is measured specifically it is always exact.  The comparison of objects that are similar is more open to description and therefore similarities are found not only mathematically, but in everyday conversations.  Making similar descriptions of objects and experiences help us to understand the world around us, people, places and things that can be similar or described as having similarities.

“Our similarities bring us to common ground; our differences allow us to be fascinated by each other.”  Similarities are much easier to associate with in the literary and artistic world.

Reading quotes like these is helpful in understanding that similarities are more variable and resonate better in the field of literature and conversation.

However, congruency, applied to motivational quotes has a way of pin-pointing the attitudes and personal changes that can be applied to life.

Stephen Covey, well known speaker and author, writes about personal congruence.  He says it comes from ‘Accurate paradigms and correct principles deep in our own mind and heart.  It comes from living a life of integrity in which out daily habits reflect our deepest values.’

In this way congruence takes on an abstract form through literary translation, but still retains its format of being superimposed in principle.

To summarise the difference between congruence and Similarity: Please see the comparison chart below. 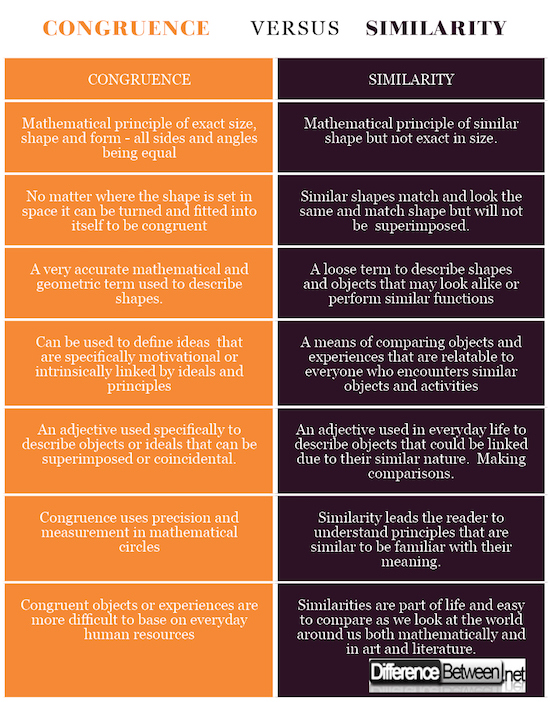