Difference Between Conservatives and Liberals

Within the framework of national politics, we can usually identify two different ways of thinking: a conservative approach and a liberal perspective. In theory, the two ideologies lie at opposite ends of the political spectrum; yet, the reality is much more blurred. Conservatives and liberals have different beliefs and opposing views on the structure of the society, the role of the government and, in general, on the progress of the nation. In fact, the main difference between the two lies in how much of the past – or of the present – should be maintained for the future 1 . 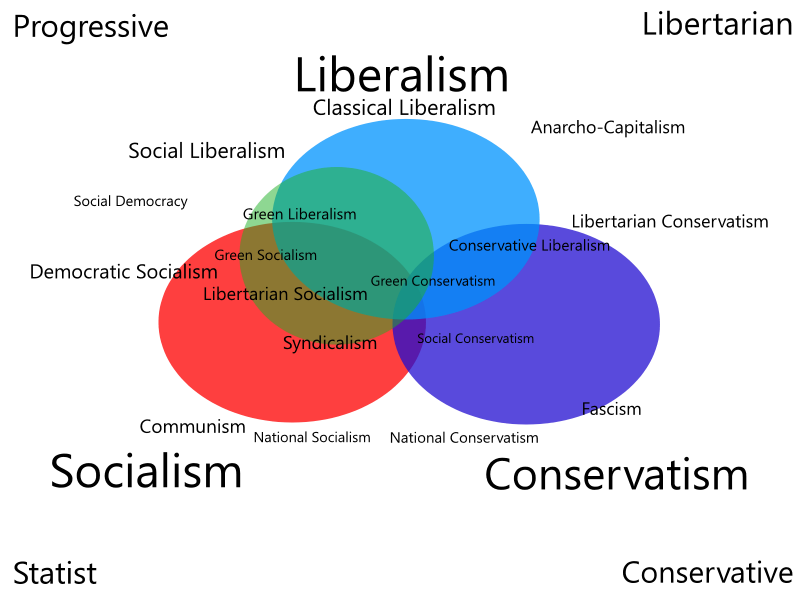 In general, conservatives are associated with right-leaning movements and are characterized by the firm belief that progress should be controlled and, in some instances, impeded in order to preserve traditional values. Conservatives are often part of the dominant group: why would they want to change things when they benefit from the current social/political/economic order?

Alternatively, if they are not part of the dominant group, they are worried about the consequences and the drastic changes brought about by progress. For instance, in the Western world, liberal movements have dominated the political scenario for the last few decades. Yet, with the threats posed by the spread of terrorism and by the growing wave of migration, many Westerners have begun to take a more conservative stance as far as immigration policies and border control are concerned. In the U.S, Republicans are the traditionally conservative party.

Liberals are left-leaning, open to progress and highly reliant in the government to solve problems. Originally, liberals were mainly part of minority groups striving for social changes, whereas today they may also be part of dominant groups. Liberals want to change existing structures and believe that strictly sticking to the tradition (and to traditional values) only slows the society down and impedes progress and development. In the United States, Democrats are considered the liberal party.

Conservatives and liberals – just as Republicans and Democrats – have opposing views on several key issues 2 . While the opposition between the two may resemble the dichotomy between Democrats and Republicans, these differences exist in (almost) al countries of the world.

Liberals believe that women have the right to decide what happens to their own body. Freedom of choice is the main pillar of the liberal perspective. Furthermore, liberals think that the government should provide financial and structural support to all women – even to the indigent ones – in order to ensure safe and legal abortion.

Conservatives believe that abortion is the murder of a human being with separate rights. Therefore, they only admit abortion in case of rape or when carrying on the pregnancy could seriously endanger the mother’s health.

Liberals believe that death penalty should be abolished and that capital punishment should be commuted to life sentences. For liberals, every execution risks to kill an innocent person.

Conservatives believe that death penalty is the appropriate punishment for certain crimes, including murder and terrorist acts.

Liberals believe that the government should interfere in and regulate the economy of the nation in order to protect citizens from corporate power. The support for governmental intervention is motivated by the belief that the government cares (or should care) about public interest.

Conservatives support free market and the capitalist system. In their view, the free market system produces more economic growth, greater welfare ad higher standards of living. Conservatives believe that the government should not regulate the economic system of the nation.

Liberals believe that climate change – and consequently the use of fossil fuels – is a serious threat. Therefore, they think that the government should invest in alternative energy sources such as wind and solar power.

Conservatives believe that oil, coal and gas remain the most reliable sources of energy. While not all conservatives deny the problem of climate change, most of them believe that alternative resources could never replace oil and coal.

Liberals acknowledge the fact that climate change and global warming are caused and exacerbated by the use of fossil fuels and the subsequent production of carbon dioxide. As such, liberals believe that privates and companies should reduce carbon emissions and take all necessary steps to halt global warming and save the planet.

Conservatives believe that climate change and global warming are natural and that there is no proof that supports the assumption that the use of fossil fuels can aggravate or accelerate the change in global temperature. Unfortunately, several conservative scientists support this theory – thus providing the conservatives with scientific evidence that denies climate change.

Liberals believe that everyone has the right to die with dignity and by his/her own choice. As such, they support euthanasia and assisted suicide, and believe that the government should not deprive the citizens of the possibility of terminating their lives whenever their condition becomes unbearable or the suffering is too intense. Furthermore, they think that legalizing euthanasia would reduce health care costs.

Conservatives believe that euthanasia and assisted suicide are illegal and immoral, and that it is unethical for a doctor to deliberately enable a person to terminate his/her life. Such perspective is supported by several religious beliefs that value human lives and prohibit suicide.

Liberals believe that the government should provide low-cost and equal health care services for all citizens, regardless of their income and their ability to pay. Yet, liberals do not deny the possibility of having private healthcare systems running parallel to the public system.

Conservatives believe that the healthcare system should be privatized and, while everyone should be entitled to healthcare, the government should not interfere in nor control it.

Conservatives believe that soft policies regarding border controls and immigration gravely endanger the security of the country. As such, they only support legal immigration and believe that illegal migrants should not enjoy the same rights of all other citizens. Illegal aliens should go back to their country, either voluntarily or following deportation, as they represent a threat to national security.

Liberals support same-sex marriage and believe that, in our changing and modernizing society, everyone should be entitled to marry the person he/she loves, regardless of his/her sex. Liberals advocate for equal rights for gay, lesbians, transgender and bisexual individuals.

Conservatives, strongly influenced by traditional and religious values, believe that the marriage should only exist between a man and a woman. According to their perspective, same-sex marriage are immoral and sinful.

Liberals believe that every country, while being a sovereign nation entitled to territorial integrity, is part of a wide international community. As such, individual countries should support international institutions such as the United Nations (UN) and the North Atlantic Treaty Organization (NATO) and respect international law and international human rights law.

Conservatives believe that international institutions such as the UN and the NATO limit the freedom of action of individual countries and that the sovereignty of the nation should not be questioned by international organizations.

Liberals believe that wealthy people should pay higher taxes and that the government needs tax-money to address inequality within the society and to provide for all people, including the indigent.

Conservatives believe in lower taxes for everyone. In their view, lower taxes create incentive local investments and that government programs do not benefit economic growth.

The conservative approach and the liberal perspective lie at opposing ends of the political spectrum. Conservatives are right-leaning while liberals are left-leaning. While they have opposing views on a number of key issues (i.e. economy, abortion, death penalty, euthanasia, international involvement, taxes, same-sex marriage etc.), the main difference between the two is the attitude towards the future. Conservatives want to maintain the existing structure and to preserve traditional values, while liberals believe in progress and strive for modernity and development.