Difference Between Power and Exponent 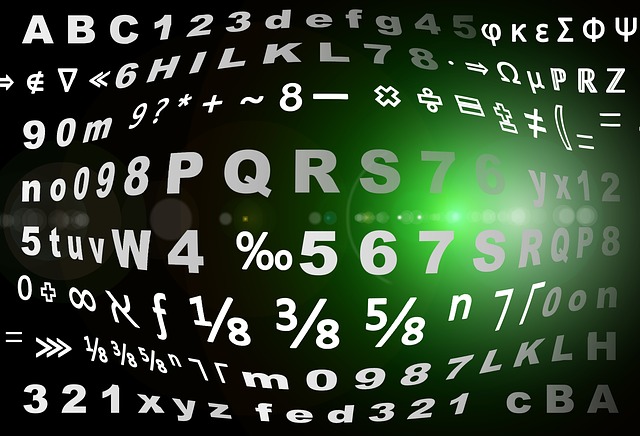 Algebra is one of the key branches of mathematics that deals primarily with the number theory. It is also referred to as the study of mathematical symbols. You might have noticed superscript in mathematical relationships, the one that is placed above to the right of a number. This is called an exponent and the whole expression is called as exponentiation.

The operation involves two numbers written as xa, where ‘x’ is the base number and ‘a’ is the exponent. The exponent is basically a superscript used to simplify larger mathematical problems. The whole expression is called “power” and written as “x to the power of a” where ‘a’ is a positive integer.

What is Power in Mathematics?

Power is a mathematical expression used to represent exactly how many times a number should be used in a multiplication. In simple terms, it is an expression that describes repeated multiplication of the same number. The expression can be written as “raising a number to the power”. Consider the following example: 3 x 3 x 3 x 3 = 81. This can also be written as 34 = 81. This is an exponential notation which simply means the number the number ‘3’ is multiplied four times by itself to get 27 or we can say “3 raised to the power of 4” or “3 raised to the 4th power” is 27. The number ‘3’ is the base number and ‘4’ is called the power or exponent. 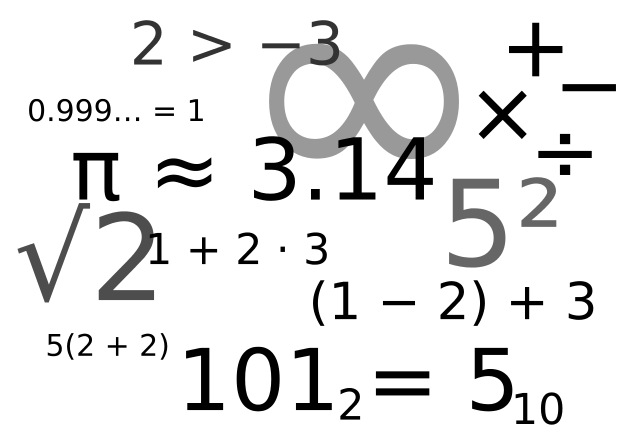 Exponent is often used interchangeably with power but in a different context. While power represents the whole expression, exponent is the superscript placed above to the right of the base number. It is a positive or negative number which represents the power to which the base number is raised meaning it states the number of times a number is to be used in a multiplication. In 53 = 5 x 5 x 5 = 125, the base number ‘5’ is used thrice in a multiplication meaning we are multiplying 5 three times by itself. Exponents often go by powers or indices. The two most commonly used exponents in geometry are square and cube. For example, ‘a2’ is ‘a square’ and ‘a3’ is ‘a cube’. If the exponent is 1, then the result is the base number and if the exponent is 0, then the result is always 1. For example, 21 = 2 and 20 = 1.

Difference between Power and Exponent

Definition of Power and Exponent

Representation of Power and Exponent

Hypothetically, the terms power and exponent are synonymous but they are used in different contexts in mathematics. It’s a number placed above or after another number to represent the power to which the latter is to be raised. Let’s say, when we write “ab” – ‘a’ is the base, ‘b’ is the exponent, and the whole thing represents “a to the power of b”. Here, the phrase “to the power of b” means ‘b’ is the power which is often used interchangeably with exponent. Rather, ‘b’ identifies the power you are referring to in the relation. Basically, power is used to represent two things, base number and the exponent.

Example of Power and Exponent

The expression 5 x 5 x 5 can be written in a shorter way as 53 using exponents.

The expression can be called “2 to the power of 5” or “2 to the 5th power”. Exponents make it easy to write and use multiplications factor in mathematics. 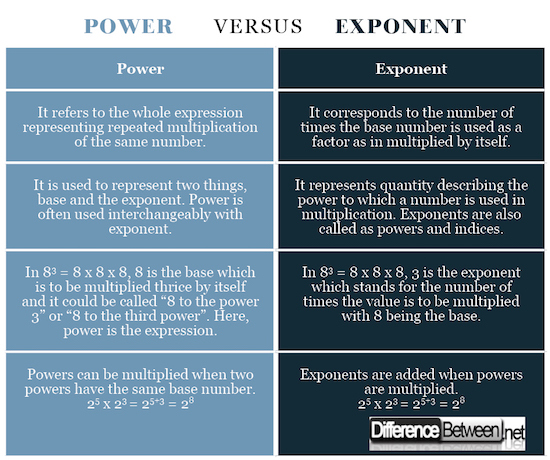 Summary of Power vs Exponent

Power and exponent both are very important tools in mathematics used to represent repeated multiplications. An exponent is nothing but a number or a variable that represents the number of times the base number is multiplied by itself. In the mathematical expression 24, 2 is the base number with an exponent of 4 meaning 4 is the superscript of 2 and the form is called exponential form. Power is synonymous with exponent, but is used in a different context. Power refers to the whole expression of writing the exponent to the head of the base number. In 23, 2 is the base and 3 is the exponent and the expression says 2 to the power of 3 or 2 to the third power.

Outside his professional life, Sagar loves to connect with people from different cultures and origin. You can say he is curious by nature. He believes everyone is a learning experience and it brings a certain excitement, kind of a curiosity to keep going. It may feel silly at first, but it loosens you up after a while and makes it easier for you to start conversations with total strangers – that’s what he said."
Latest posts by Sagar Khillar (see all)
Share Tweet Pin Mail
Categories: Mathematics & Statistics
Tags: Exponent, power
previous post Difference Between LAN, WAN, and MAN
next post Difference Between Stack and Heap