Difference Between Island And Peninsula 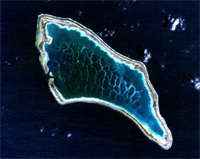 A big land mass surrounded by a narrow body of water like a river cannot be called an island whereas a landmass connected to the mainland even by a narrow strip called isthmus will be called a peninsula.

Islands are of two types Continental and Oceanic. Continental islands are situated on the continental shelf and the Oceanic are beyond the continental shelf. These oceanic islands are generally volcanic or coral in origin. Such volcanic or coral islands would generally be uninhabited due to the uninviting terrain. However, no such differentiation exists in peninsulas. Due to their characteristics they are always connected to the mainland, hence, almost always as inhabitable as the mainland.

Islands can be found in groups like the Maldives, Trinidad & Tobago, Tonga, etc. Peninsulas are never found to be in groups.

Due to the scenic beauty that is generally abundant in the islands almost always the local economy of islands or even small island countries depends on the income from tourism. Peninsulas do not enjoy any such boons.

There is no restriction of size and the islands can be very small to large continents like Australia. The peninsulas, however, will only be recognized as a peninsula if they are of a decent size. Very small fingers in the ocean would generally not be call a peninsula.