Difference Between Handloom and Powerloom 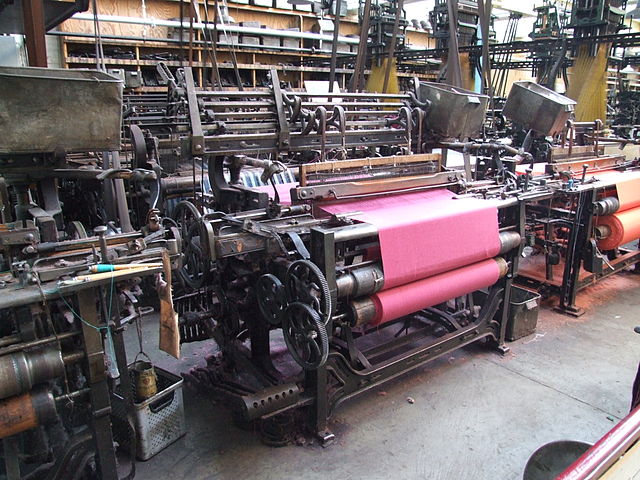 What once dominated the textile industry has been stunted by the advancement of the technological era. It’s true that the only way to create a better future is to create it from the materials of the past. The textile industry is the second largest sector in India in terms of providing employment after agriculture, maintaining the legacy of the country. India has always been at the fore front of textile industry, known for its impeccable craftsmanship in cotton weaving and dyeing. The centuries old handloom industry alone is responsible for providing employment to as many as 13 million weavers in the country.

However, the good old manually operated weaving industry is dying slowly. What used to be the only commodity-producing sector is now taken over by the more efficient Powerloom sector that use similar techniques for weaving but on purely technological grounds. Most of the 20th century has witnessed the dismantling of the weaving in the mills and a major shift from the conventional weaving to the mechanical weaving called “powelooms”. The phenomenon of a mechanically-powered loom can only be understood in the Indian context. The powerloom industry is now a cornerstone of the Indian economy in terms of foreign exchange earnings and growth of textile industry. 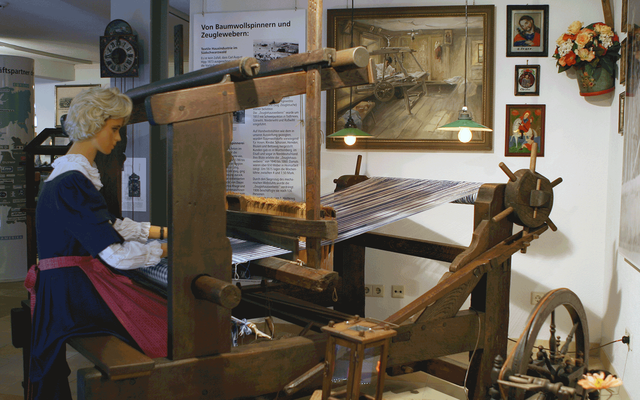 A handloom is a type of loom used to weave cloth or patterns on cloth and is operated manually without the aid of electric power. What started as a mechanism to furnish necessities has become a specialized tool for the handcraftsman specializes in furnishing art and luxury fabrics. The growing textile industry has created a vast demand for the handloom weavers which shaped the much of the 19th century cotton industry. No one exactly knows how or when weaving began, but the idea of weaving clearly predates the loom by at least thousands of years. However, the once commodity-generating sector is dying owing to the rise of more efficient modern looms such as powerlooms.

A powerloom is a type of mechanically powered loom driven by a steam engine or electric power used to weave cloth. It was not until the 1850’s that the powerloom industry really came into the picture, owing to the rising demand of cotton and scarcity of production. Powerlooms are a major shift from the conventional handlooms that once dominated the textile industry. As they are mechanically powered, they work at least ten times faster than their handloom counterparts, thereby controlling much of the fabric market. However, a powerloom can only replicate a limited variety of designs and patterns.

Difference between Handloom and Powerloom

Both are tools used to weave patterns of thread into cloth for making woven fabric such as cotton, but this is where the similarities end. This article highlights some key points comparing the two weaving tools.

The handloom is a manually operated loom used to weave cloth without the aid of electric power. This is a woven fabric that uses mechanical energy of the weaver and the motion of the handloom is purely manually operated instead of use of electric energy. Loom is actually a device used to weave patterns on fabric and the process is called weaving. Powerlooms, on the other hand, are fundamentally different from handlooms and are powered mechanically rather than using human power to weave patterns into cloth.

A loom is simply a device used to weave cloth and tapestry and operated wholly or partly by human hands. Manually operated weaving is done on pit looms or frame looms. A pit loom, as the name suggests, is a type of loom set on the floor facing a pit so that yarn can get moisture and two peddles set for the weaver to operate. A frame loom is a self-supported loom that sits above the floor with almost similar mechanism to what the ground looms hold and are mainly used to produce twill, sating fabric. However, both looms can be used to weave malkha cloth.

A powerloom is mechanized loom which runs by steam or electric power. The looms are driven by a steam engine by belts which lead to more effective and efficient output, plus higher quality of fabric produced compared to handlooms. The handlooms, on the other hand, are used to weave fabric using hand and loom made from wood and the resultant yarn varies according to the materials used and the skill of the weaver, which may result in a less effective fabric. The handloom is the oldest type of loom used for weaving, thus cannot produce complex designs like powerlooms.

Both handlooms and powerlooms use a small carrier device called shuttle for yarn insertion, except warp threads are raised and lowered by manual shedding in handlooms which requires higher warp shed, which accounts for high-quality woven fabric. Powerlooms are modern looms with higher production capacity than handlooms, plus they are able to produce complex designs with less or no human effort. Although, initial investment is high in powerlooms, they operate at much higher speeds than their handloom counterparts which results in the production of more variety of designs. 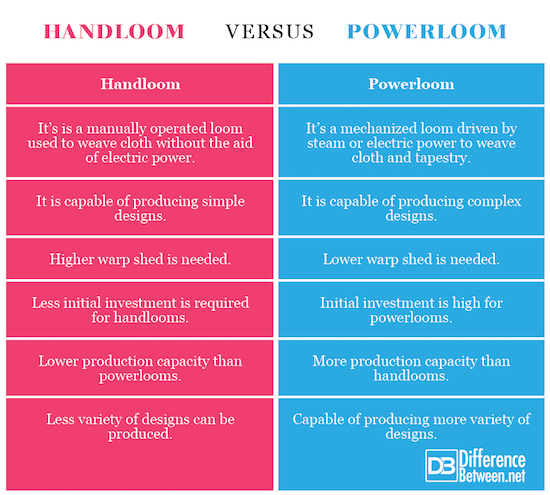 Although both handlooms and powerlooms are tools used for weaving patterns or thread into cloth, they are fundamentally different in the way they operate. Handlooms are manually operated looms used for weaving in which picking and beating is done manually by human hands, whereas powerlooms are mechanized looms driven by stem engines or electric power in which shedding, picking and beating are done automatically rather than manually. The features alone indicate the main advantages of the more efficient powerlooms over the conventional manually operated handlooms. Handloom industry is dying slowly owing to the rise of more efficient and effective powerlooms which are capable of producing effective designs at much higher speeds.

Outside his professional life, Sagar loves to connect with people from different cultures and origin. You can say he is curious by nature. He believes everyone is a learning experience and it brings a certain excitement, kind of a curiosity to keep going. It may feel silly at first, but it loosens you up after a while and makes it easier for you to start conversations with total strangers – that’s what he said."
Latest posts by Sagar Khillar (see all)
Share Tweet Pin Mail SMS
Categories: Industrial, Technology
Tags: Handloom, Powerloom
previous post Difference Between HBO Go and HBO Now
next post Difference Between Gout and Pseudogout