Difference Between Norton and McAfee

With the increasing use of Internet and the Web, cyber criminals have become more active than ever. Computer security has become the biggest security concern these days. Numerous scam and fraud schemes are being directed toward public Internet users.

People are so consumed by the smartphones and Internet that they fail to realize the serious repercussions of their addiction. Computer technology has been growing at an unprecedented rate and security preparedness has not been up to the mark to go with the current growth. This is because almost everyone with a smartphone can access the Internet. Even children are allowed to access the Web at an early age at schools and at home. Handheld devices with network access are now easily available to everyone. This gives rise to a myriad of security issues.

Corporate, government, and education system is equally affected by these never-ending security issues such as identity theft, data breach, data integrity, confidentiality, and so on. There are numerous issues concerning computer security and the electronic commerce environment. One of the most pressing issues today is computer virus which are almost everywhere. This is where antivirus programs come to the picture. Antivirus, as the name suggests, are so designed and developed to detect and eliminate computer viruses. However, with the proliferation of other kinds of threats such as malware, spamware, antivirus software programs started to provide protection from other computer threats. Norton and McAfee are two of the most recognized names in the computer security industry that sell antivirus programs.

Norton is one of the most popular and widely used antivirus and antimalware software developed by Symantec Corporation. It is one of the prominent names in the computer security business, when it comes to keeping your computer safe and secure from all kinds of viruses and online threats. Norton has a large customer base to potentially report new viruses to them so that they can update their software programs accordingly. As new threats emerge, Norton keeps on updating its antivirus programs to find and stop potential malware and other security threats. Symantec is one of the world’s largest endpoint security vendors, providing security to millions of devices on both personal and corporate networks around the world. Norton Security is arguably the undisputed king of computer security that provides the best protection for your computer, smartphones, and other mobile devices.

Difference Between Norton and McAfee 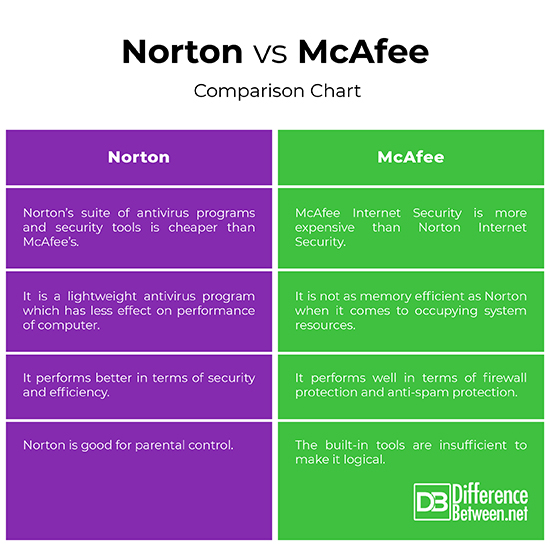 Summary of Norton Vs McAfee

While Norton and McAfee both are two of the most recognized names in the computer security business with a well-established customer base, choosing the right software between the two is a little difficult, especially with both of them offering an extensive set of features to better protect your computers from security threats. If you wish to go beyond the basic antivirus protection, then McAfee’s security suite is the logical solution for you, thanks to its complete security solutions and advanced protection-related features. However, Norton excels in internet security and provides all-around protection from all kinds of malware threats with utmost accuracy and it’s cheaper than McAfee.

Outside his professional life, Sagar loves to connect with people from different cultures and origin. You can say he is curious by nature. He believes everyone is a learning experience and it brings a certain excitement, kind of a curiosity to keep going. It may feel silly at first, but it loosens you up after a while and makes it easier for you to start conversations with total strangers – that’s what he said."
Latest posts by Sagar Khillar (see all)
Share Tweet Pin Mail
Categories: internet, Software, Technology, Web Applications
Tags: McAfee, Norton
previous post Difference Between Hashimoto’s and Hypothyroidism
next post Difference Between Hormones and Neurotransmitters