Difference Between PlayStation and Xbox

We have come a long way since the computer could only be described as surreal or a dream of the distant future compared to today’s PCs, laptops and gaming consoles. Talking about game consoles, the Magnavox Odyssey was the world’s first consumer device to allow people to play interactive games on their television. The Odyssey’s games were only played with white squares on a black background. While the video game craze began with the “Pong”, the system for the Odyssey set the stage for the modern age of video games and modern consoles like the PlayStation and Xbox. The PlayStation was a 32-bit console from the Japanese electronics giant, Sony and with its debut, it quickly established itself as a major player in the console market. Then came the Microsoft’s Xbox which was the direct competitor to the Sony’s PlayStation and other video game consoles such as Nintendo. Let’s take a look at some key differences between PlayStation and Xbox.

The PlayStation was a 32-bit console from Sony which over time, went on to become one of the world’s most powerful video game consoles and the first console to ship more than 100 million units. The first PlayStation was launched back in 1994 and along with it, released massively popular game franchises like Final Fantasy, Tomb Raider, Resident Evil, and Metal Gear Solid on the masses. In 2000, Sony updated its line with a new model called the PSone, which was smaller and lighter than the original PlayStation and supported pairing with an optional LCD screen. In the United States, it was released at a $99 price tag alongside Sony’s new PlayStation 2. In 2013, Sony released its most advanced and powerful console, the PlayStation 4 or PS4. The PS4 was a game changer and one of the most popular video game consoles ever made.

Xbox is the video game console system created and owned by Microsoft. The American multinational technology giant released the first Xbox gaming console back in November, 2001 with a clear intention to be in direct competition with the Sony’s PlayStation along with other video game consoles. However, unlike other game consoles, the Xbox is not based on a specialized hardware platform designed specifically for playing games. Instead, it was based on the same hardware on which the Microsoft’s personal computer platform was based. The Xbox hardware is derived from the same electronic architecture as the standard IBM-compatible PCs. In 2005, Microsoft released its popular Xbox 360 to compete with Sony’s PlayStation 3, and in 2013, Xbox One was released as the successor of the Xbox 360 to compete with its arch rival PS4.

Difference between PlayStation and Xbox

– PlayStation is the brand name of the gaming console created by Japanese electronics giant Sony whereas Xbox is the video game console system created and owned by Microsoft. The first PlayStation was launched back in 1994 and the PlayStation has come a long way since then. The first Xbox was released back in November 2001 and in 2005, Microsoft released its popular Xbox 360 to compete with Sony’s PlayStation 3.

– The 2005’s released PS3 breaks from the traditional architecture commonly seen in video game consoles and it has 256 MB of XDR DRAM and 256 MB GDDR3 video memory, and Nvidia RSX graphics processor. On the Microsoft side, the Xbox 360 is an evolution of the original Xbox; however, it uses a custom triple-core IBM CPU instead of the Intel chipset with 512 MB main memory and ATI Xenos graphics processor. Both the systems clock at 3.2 GHz, however, the PS3 has more horsepower and it can perform more operations per second compared to its Xbox counterpart.

– The PlayStation 4 (PS4) is one of the most popular and powerful video game consoles by Sony. It was also the first console to ship more than 100 million units. It is available in a slim version and a dynamic 4K PS4 Pro version. The Xbox One was released in 2013 as the successor of Xbox 360 and like the PS4, it uses an AMD x86 processor and GPU. However, the PS4 has a faster 8GB GDDR5 memory whereas the Xbox One comes with a slower 8GB DDR3 memory. PS4 is a better gaming machine than the Xbox One.

– While both the gaming consoles has some of the popular game franchises of all time including some exclusive titles, ports and indie games, the PS4 is probably the winner in the exclusives race. The PS4 offers some of the most popular and highest-rated AAA titles of the generation such as God of War, Red Dead Redemption 2, etc., while the Xbox One is a treasure trove of some of the most popular first party games such as Halo 5, Gears 5, Forza Horizon 4, etc. 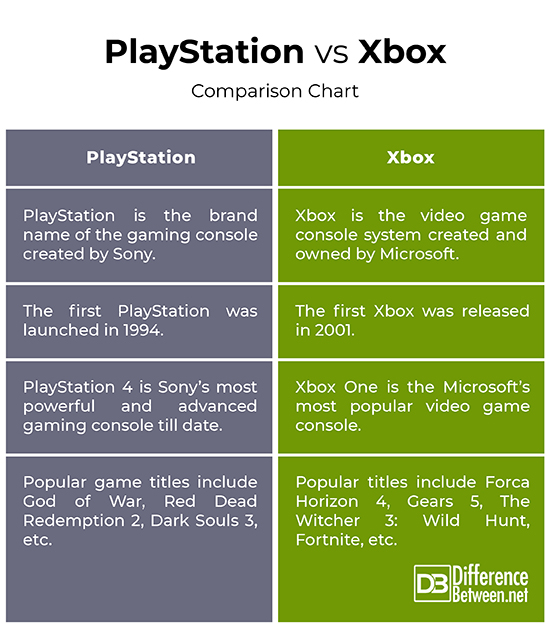 Summary of PlayStation vs. Xbox

Sony’s PlayStation offers some of the world’s most popular and highest-rated AAA game titles such as God of War, Red Dead Redemption 2, Dark Souls 3, Spider-Man, Metal Gear, Overwatch, and more. The PlayStation 4 is the most advanced and powerful gaming console the world has ever known. However, Xbox has its fair share of strengths and weaknesses too. Th Xbox One X seems to be better than the PS4 in terms of graphics performance and visual customization.

Outside his professional life, Sagar loves to connect with people from different cultures and origin. You can say he is curious by nature. He believes everyone is a learning experience and it brings a certain excitement, kind of a curiosity to keep going. It may feel silly at first, but it loosens you up after a while and makes it easier for you to start conversations with total strangers – that’s what he said."
Latest posts by Sagar Khillar (see all)
Share Tweet Pin Mail
Categories: Gadgets, Technology
Tags: playstation, xbox
previous post Difference Between Goldenrod and Ragweed
next post Difference Between Strong and Weak AI