Difference between SHA1 and SHA2 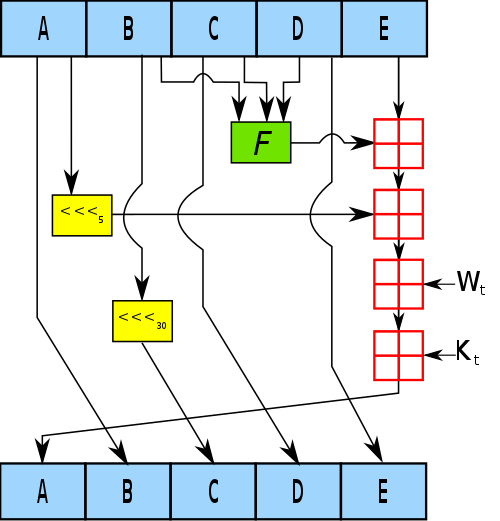 If you have already heard of the Secure Hash Algorithm, or SHA, in its many forms, then you must know hash algorithms have existed in many forms at least since the 1950s. Previously, hash algorithms were limited to rudimentary data integrity and user authentications, but with the rapid increase in attackers seeking to exploit electronic communications, the role of the hashing algorithms has changed. Today, hash algorithms are incorporated into other protocols like VPN protocols, digital signatures, software distribution and license control, database file system integrity, Web page file modification detection, to name just a few. That being said, SHA-1 and SHA-2 are the Secure Hash Algorithms (SHA) commonly employed by many operating systems to encrypt passwords.

SHA-1 and SHA-2 are the secure hash algorithms required by law for use in certain U.S. Government applications, along with use within other cryptographic algorithms and protocols, for the protection of sensitive unclassified information. SHA-2 is the potential successor to SHA-1 and includes a significant number of changes from its predecessor, and consists of four hash functions with different digest sizes: SHA-224, SHA-256, SHA-384, and SHA-512. SHA-2 is believed to be significantly stronger and secure, and not subject to the same security vulnerabilities as SHA-1. Although, SHA-2 bears some similarity to the SHA-1 algorithm, it generates a longer hash. We take a look at the two hashing algorithms to see which one’s more secure and stronger.

SHA-1 is the most widely used of the existing SHA hash functions and is employed in several widely-deployed security applications and protocols. It’s a cryptographic computer security algorithm created by the National Security Agency (NSA) in 1995, and published by the NIST as a U.S. Federal Information Processing Standard. SHA-1 generates an almost-unique message of length <264 in blocks of 512 bits. This means it processes blocks of 512 bits in sequence when computing the message digest. SHA-1 produces a 160-bit message digest. The algorithm is based on principles similar to those used by Ronald L. Rivest of MIT in the design of the MD4 and MD5 hashing algorithms in the early 1990s. SHA-1 is also used in distributed revision control systems such as Git, Monotone, and Mercurial. 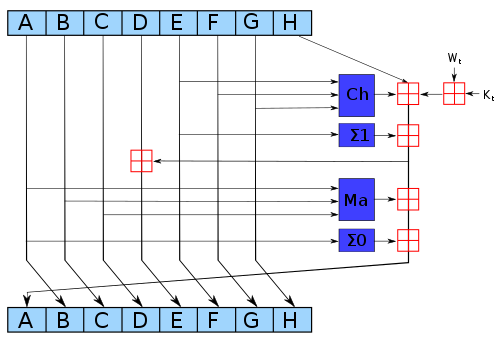 SHA-2 is a set of cryptographic hash functions to replace the SHA-1 algorithm. The NIST standard SHA-2 was designed by the U.S. National Security Agency and published in 2001. The SHA-2 family of hash functions serves the same end as SHA-1, but features a higher level of security than its predecessor. It was designed to overcome the security vulnerabilities in the SHA-1 algorithm. SHA-2 is a family of four hash functions with different digest sizes: SHA-224, SHA-256, SHA-384, and SHA-512. Like SHA-1, all functions of the SHA-2 family follow the MD construction. SHA-256 and SHA-512 are the two main instances of the family, which work on 32-bit and 64-bit words respectively, and therefore use different algorithms. It is widely used to validate and sign digital security certificates and documents.

Difference between SHA1 and SHA2

– Both SHA-1 and SHA-2 belong to the SHA family of cryptographic hash functions designed by the U.S. National Security Agency and published by the National Institute of Standards and Technology (NIST). Both are the secure hash algorithms required by law for use in certain U.S. Government applications, along with use within other cryptographic algorithms and protocols. SHA-2 is, however, a more secure hashing algorithm and a successor to the now deprecated SHA-1 hashing algorithm. The SHA-1 algorithm is no longer secure and SHA-1 certificates and intermediates are not recognized anymore.

– SHA-1 was the primary hashing algorithm in widespread use from 2011 to 2015, until security vulnerabilities in the algorithm prompted a revaluation. SHA-2 was designed to overcome the vulnerabilities in the SHA-1 algorithm. Although, SHA-2 bears some similarity to the SHA-1 algorithm, it generates a longer hash and is significantly stronger and secure than SHA-1. While both the algorithms are based on the Merkle-Damgård construction, SHA-2 features a set of additional SHA algorithms to match the higher security levels of longer keys. Additionally, SHA-2 has much improved and secure certificates that are specifically designed to protect your system from potential breaches. 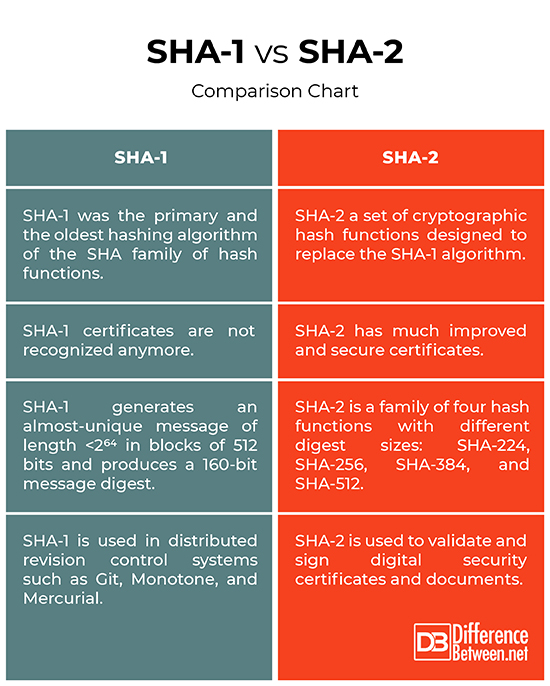 Summary of SHA1 and SHA2

Hash algorithms have existed in many forms since the 1950s. With the increased value of data interactions and increased cyber attacks, the requirements for hashing algorithms have changed. Once limited to rudimentary data integrity and user authentications, hash algorithms are now used for creating message digests and digital signatures, thus tightening the bonds of data and originator of data. After the security of SHA-1 was compromised, the digital world has shifted to a more secure, stronger SHA-2 hashing algorithm. SHA-2 is a set of additional hashing algorithms to match the higher security level of longer keys.

Outside his professional life, Sagar loves to connect with people from different cultures and origin. You can say he is curious by nature. He believes everyone is a learning experience and it brings a certain excitement, kind of a curiosity to keep going. It may feel silly at first, but it loosens you up after a while and makes it easier for you to start conversations with total strangers – that’s what he said."
Latest posts by Sagar Khillar (see all)
Share Tweet Pin Mail
Categories: Software, Technology, Web Applications
Tags: SHA-1, SHA-2
previous post Difference Between Sterilization and Pasteurization
next post Difference Between Alimony and Child Support