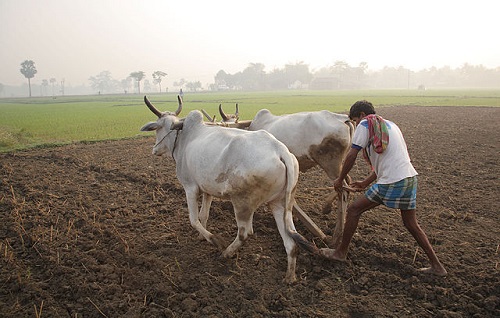 Indian farms are inherited by family members from generation to generation. In each generation, the original plot of land gets subdivided among family members. Consequently, the size of an average farm is small in size, around 2.3 hectares. In contrast, U.S. farm holdings are large, around 250 hectares.

Most Indian farmers have simply continued their father’s professions. In their schooling years, they may have spent a considerable amount of time assisting their parents on the fields. They may have received basic education at the village school before dropping out. Hence, the average Indian farmer does not have any basic education and is probably a dropout. This is not the case in the U.S. American farmers are mostly well educated and will probably have specialized in some area of agriculture in college. Being educated, they keep themselves up to date on the latest developments in agriculture and incorporate these in their farmlands.

Indian farming is very much labor intensive, and most farmers use traditional methods of farming like plowing with bullocks. U.S. farming is mostly capital intensive with large-scale use of heavy and advanced machinery. The number of farm laborers is very small. Indian farming is still very much dependent on the weather and, consequently, is able to grow only two to three crops in a year, which is restricted to either rice or potatoes. On the other hand, U.S. farms are able to grow multiple crops in one year such as soybeans, beet root, in addition to wheat, etc. U.S. farmers take advantage of scientific and technological innovations and facilities to enhance their production levels. For example, they may do soil testing in laboratories to know the fertility level of the farmland and the type of crop best suited to grow profitably. Such testing done periodically enables them to take steps to restore the soil fertility. Indian farmers on the whole do not have access to such facilities and do not know about such possibilities. Indian farming is heavily dependent on the vagaries of the monsoon rainfall. Despite massive investment, including the building of huge dams, irrigated lands are still very few in number. Thus, a change in the amount of rainfall has disastrous consequences for Indian farming. In contrast, U.S. farming uses advanced systems of irrigation methods, which allow all-year-round production. Indian farmers are mostly owned by poor families and managed by family members themselves. In contrast, U.S. farms are owned by rich business corporations and managed by specialized manpower.

Indian farms have a long way to go before they can catch up with the current level of U.S. farms. Though the Indian government is making efforts, the future is not bright.