Difference Between Anglican and Catholic 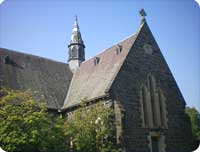 Anglican vs Catholic
Though they came from the same Christian roots founded by Jesus Christ in Judea 2000 years ago, Anglicans and Catholics have diverged to become two separate forms of Christianity.

Definition
Anglican refers to the Church of England and its related branches throughout the world.
Catholic comes from the Greek for universal. It was the first form of Christianity and claims to have kept apostolic leadership unbroken since the time of St. Peter.

Origins
The Anglican Church came into being during the Reformation. It was the brainchild of Henry VIII. He couldn’t secure a sanctioned divorce from the Catholic Church and therefore broke off to form his own sect. During the time of Elizabeth I, the Anglican Church was formalized.
The Catholic Church began as soon as Christ’s apostles began to preach after his death. In the 4th century AD, Catholicism was made the official religion of the Roman Empire. Just prior to that, the Council of Nicene codified Catholic beliefs.

Leadership
The Anglican Church does not recognize any central hierarchy that places one church or priest over all the others. This gives each individual church and region a lot of freedom to decide on policy. All Anglican churches are part of the Communion. The Archbishop of Canterbury is considered the first among equals but this does not give him authority over churches outside his region.
The Catholic Church has a fully entrenched hierarchy. At the lowest rung are the parish priests, then the bishops, arch-bishops, cardinals, and finally the Pope himself. Each level has authority over more congregations. The Pope is chosen by the cardinals and is thought to be the successor of the apostle Peter. The Pope is also thought to be infallible on matters of church doctrine.

Beliefs and Practices
Anglican priests can marry. Parishioners take communion, but believe it to be a symbolic act. The mass entails a lot of ‘smells and bells,’ as one cheeky parishioner put it.
Catholic priests must take a vow of celibacy. The same holds true for monks and nuns. Communion is believed to be accompanied by the miracle of transubstantiation. There is liberal use of incense and bell ringing in the mass.

Summary:
1. Anglicans and Catholics were one in the same until Henry VIII broke from the Church.
2. The Anglican Church eschews hierarchy while the Catholic Church embraces it.
3. Much of the mass is the same, but Catholics believe the bread and wine is actually the body and blood of Christ.
4. Both Churches have been weathering their own storm of controversy in recent years.