Difference Between NSAIDs and acetaminophen 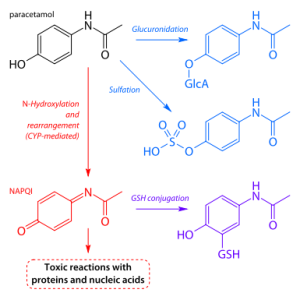 Amongst the oldest and the most commonly used class of medications are NSAIDs and acetaminophen (or paracetamol). They are freely sold over the counter and can be purchased without a prescription.

NSAIDs are Non Steroidal Anti Inflammatory Drugs i.e. these are medications other than steroids that are used as anti-pyretic (to reduce fever), analgesic (painkiller) and in higher strengths also exhibit an anti-inflammatory action. These have an action similar to steroids, that of depressing eicosanoid receptors. They are not narcotic and do not produce addiction or withdrawal symptoms and thus preferred over opioid analgesics. Common examples are ibuprofen, aspirin and naproxen. They inhibit activity of both COX- 1 and COX- 2 receptors, which is how they reduce pain, fever and inflammation.

Acetaminophen or paracetamol is the molecule N-acetyl-p-aminophenol and is used to reduce fever and pain. It is commonly used for headaches, cold and flu. It is often combined with stronger opioid analgesics to treat post-surgical pain. The therapeutic dose is up to 4000mg/day for an adult. Since overdoses can be fatal, caution must be exercised in using it. An acute overdose can lead to potentially fatal damage to the liver and is one of the commonest causes of drug overdose in the US.

NSAIDs are used for pain relief in rheumatoid arthritis, osteoarthritis, gout, dysmenorrhoea, headaches and migraines, post-surgical pain relief, fever, renal colic, traumatic injury pain. Aspirin is used in all cardiac patients to inhibit aggregation of platelets and prevent adverse cardiac events like heart attack. Since this inhibition is irreversible, it might lead to gastrointestinal bleeding and increases the chances of strokes in the elderly. Also, aspirin is known to cause dyspepsia commonly. Also, studies have shown a 1.4 times increase in the risk of erectile dysfunction due to use of NSAIDs over a 3 month period. The NSAIDs that inhibit COX-1 inhibitors are particularly to be used with caution because of their potential to cause gastrointestinal bleeds, ulcers. Use of selective COX-2 inhibitors is thus to be emphasized while buying these medications. NSAIDs may interact with other drugs like antibiotics called quinolones and increase the chance of them causing a central nervous system side-effect like a seizure.

Paracetamol is not anti-thrombotic and can be safely used in people who have bleeding/coagulation issues. It does not irritate the stomach either and can be safely used even in pregnancy. It is metabolised by the liver and can cause hepatotoxicity. Chronic alcoholics are especially at a higher risk of fatal liver damage. It can be safely used in children although this year the U.S. FDA issued a warning regarding its rare but potentially fatal adverse skin drug reactions called Steven’s Johnson syndrome and toxic epidermal necrolysis.

NSAIDs are non steroidal anti inflammatory drugs. They are drugs like naproxen, ibuprofen and aspirin. They are not steroids, as the name clearly suggests.

Acetaminophen or paracetamol is an anti-pyretic and analgesic molecule safely usable in adults up to 4000mg/day. It is safe for even children and in pregnancy.

NSAIDs are generally safe, but COX-2 selective inhibitors must be used to prevent chances of gastrointestinal bleeds and peptic ulcers.

NSAIDs are used as anti-pyretic, analgesic and as mild anti-inflammatory agents. They are widely used for pain relief in a lot of medical conditions.

NSAIDs should be used cautiously in people with bleeding/coagulation issues. Paracetamol can be safely used in such people without the fear of a heart attack or stroke.

Paracetamol can cause potentially irreversible liver damage and should be used carefully by chronic alcoholics.
NSAIDs and paracetamol should be used in conjunction only if prescribed by a doctor.