Difference between tadpoles and frogs 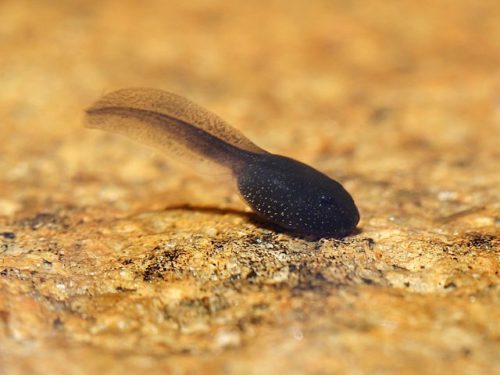 Amphibians have been around for over 350 million years with the earliest known frogs appearing somewhere around 190 million years. These amphibians are crucial to the environment as they provide scientists with an indication of the quality around them. Frogs begin their lifecycle in egg form and then hatch as aquatic larvae known as tadpoles. These tadpoles will in turn morph into adult frogs. The life cycle of a frog is one of the most extraordinary cases of transformation in vertebrates  and much attention is made to the change from tadpole to adult frog [1].

Baby frogs are known as tadpoles or pollywogs. Unlike adult frogs, they very commonly look like fish and lack limbs. Instead they have long, paddle-like tails that allow them to move and survive in water. As they grow, their physical characteristics change at different stages of their life cycle together with their behavioural patterns and feeding habits [1]. As time passes, their body begins to change into a young adult. The tail used for paddling reduces in size and limbs begin to develop. At first, rear legs will form followed by front limbs. The jaw and skull structure is also distinctly different in tadpoles. In terms of their skull, they have cartilage instead of a hardened bony structure as adult frogs do. They also possess smaller teeth that allow them to chew plants and organic matter during feeding [2]. As tadpoles grow in size, their head structure begins to change, leading to the development of a more defined jaw and the formation of a tongue. In addition, the gills make way for the lungs and the intestines shorten in length in order to adapt to the diet of adult frogs. Tadpoles are also known to have a two chambered heart and a single loop of vessels [3].

While tadpoles lack limbs and possess long tails, adult frogs on the other hand have two hind limbs and two fore limbs. The hind limbs are exceptionally powerful and this, together with their webbed feet helps them to jump great distances and swim. Adult frogs have a more developed bony skull and form a defined tongue that can be used for feeding [2]. The tongue is muscular and replaces the teeth. Adult frogs have a three chambered heart and two loops of vessels which develop over time as well as lungs to aid breathing.

Since tadpoles only swim in water and cannot survive on land, they have gills to help them breathe. Tadpoles open their mouths as they swim and take in water. As they close their mouths, muscles transfer water to the gills. The gills consist of small membranes or flaps called lamellae which extract oxygen from the water as it passes over them. This oxygen then enters the blood stream via diffusion. Tadpoles can also swim to the water surface and take in oxygen from the air. Over time, the tadpoles grow and mature and the gills are adsorbed by the body followed by the development of other respiratory organs and systems [3]. 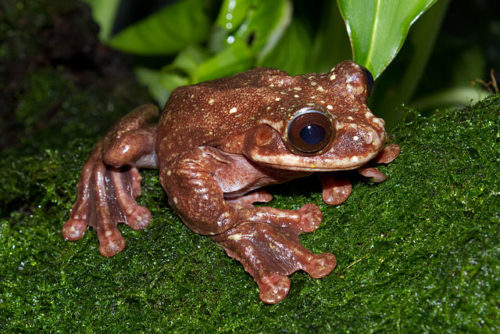 Tadpoles are mainly herbivores and they are known to eat a variety of things however this may differ from species to species. Some species, however may also be omnivores as they eat organic debris from decomposed plants and animals [4]. Typically, a tadpole will feed off  the algae that grows on plants and rocks or which form on the surface of the water. They commonly possess a row of miniature teeth which are also known as ‘denticles’ made of a protein-like substance called keratin. After consuming the algae, it subsequently passes into the throat and intestine where it is further digested. Tadpoles do not have a stomach but rather a long and coiled intestine that enables them to eat plant matter. In addition, they may also require some form of protein and calcium in their diet [5].

Frogs on the other hand are carnivores and they eat a range of live prey like insects, snails, spiders, worms and small fish. Some of the bigger species may even eat mammals like lizards, rats and mice [5]. Adult frogs have no teeth and instead swallow their entire prey without chewing. They use their tongue to capture their prey and their developed upper jaw to hold on to their prey [6].

In conclusion tadpoles can be defined as being the actual offspring of frogs which hatch from actual  jelly-like frog eggs. While there are some similarities between them such as both frogs and tadpoles requiring oxygen, there are also many differences between them which can be distinctly identified as shown above. As they grow, these differences become more apparent together with their behaviour and feeding habits.

Summary of differences between tadpoles and frogs