Difference Between Coyote and Wolf 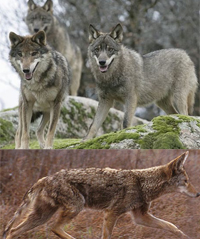 Coyote vs Wolf
A coyote looks like a wolf, but in fact both wolves and coyotes have many differences between them. Sometimes coyotes are referred to as ‘barking dogs’ and belong to the dog family. Red wolves are the species which resemble coyotes the most.

Unlike a wolf, a coyote has a bushy, thick tail, which it holds low to the ground. Wolves generally have gray, black, or white fur and are bigger in size than the coyotes. When an adult coyote weighs around 10 kg, a wolf can be around 25 kg. The legs of a coyote are visibly thinner than those of a wolf.

Coyotes are mostly found in the southern, central, and western Canada. Wolves can be found in Alaska, Northern US, Labrador, and the Yukon territories. Coyotes are generally considered shy and non-confrontational and their main foods are smaller animals like mice and rabbits, certain vegetation, and carrion. They often hunt in pairs and prey on animals like deer when together. Wolves, on the other hand, prey on larger animals like goat, sheep, and moose and hunt in packs. They use the method of scent marking to determine their territories and track down preys.

Sometimes coyotes can be found in the less human inhabited places, but usually do not cause any harm to the residents there. In fact coyotes are helpful to human beings to an extent. They prey on the small rodents, which destroy cultivation. These animals are often considered intelligent and adaptable. However it can attack and feed on your poultry and pet birds, if left unnoticed. To keep these animals away from your pets, you can use bright flashlights, make loud noises to scare them away, and keep your pets in safe cages or fences. Wolves also are secretive and run on seeing people. To keep wolves away from your surroundings, always maintain clean and secure surroundings. However, coyotes are considered to be more adaptable to humans than wolves. They usually do not attack humans owing to their small sizes and shy behavior.

Wolves howl to communicate with the other members of the pack and other packs. They also howl to attract mates, when they wake up, and when they sense any danger. The howls or barks of coyotes are high pitched and are long rising and falling notes. People refer to the calls of coyotes as yips and yelps.

Summary:
1. Wolves are larger than coyotes.
2. Coyotes have bushy tails than wolves, and often hold it low to the ground.
3. Wolves hunt in packs, while coyotes hunt primarily in pairs.
4. Coyotes are more adaptable to human beings than wolves.
5. A wolf’s calls is termed as howls, while that of coyotes are termed as howl, yelps, and yips depending on the rise and fall of the note.