Difference between Laptop and Tablet 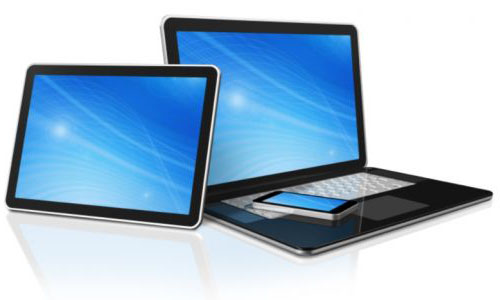 The life of today has improved a lot and the people of this generation take advantage of the latest technology for their benefit. People today are fully dependent on technology and do almost all the work by using the latest available machines and gadgets. For example we use cars to travel long distances in just few minutes and use a mobile phone or a telephone to communicate with a people far away. Similarly, we use computers to do our everyday tasks and almost all official work is done on computers now. As if this was not enough, the age of desktop computers is also somewhat past us as it is common to work on laptops and tablets instead of the traditional desktop computers as a few decades ago. Although most tasks can be performed on either of the two, there are certain difference between them with regard to features and limitations.

To begin with, a laptop is a portable computer. This means that it gives all the options of a computer but is smaller and is easy to carry from one place to another. A tablet computer, however, is a computer that is still smaller and has better portability but fewer features and/or options. It has a touch screen display and its battery, display and circuitry is in a single unit.

Laptops are thicker and heavier in weight but tablets are more portable than laptops due to the fact that they are easier to carry owing to their lesser weight and thickness.

Another difference is that a laptop contains a physical keyboard whereas a tablet does not have a physical keyboard. As mentioned previously, it has a touch screen and typing can be done on the touch, on-screen keyboard. In addition to this, a laptop has a trackpad for a mouse whereas a tablet has no such facility. Selecting or scrolling can be done on the touch screen.

Moving on, there is a CD or DVD Rom in most laptops but this feature is absent in tablets.

Some tablets are very complicated and hard to use but laptops are very simple and we can easily use it and do our work comfortably. In laptop the length of the screen is big which benefits us when watching a movie or playing a game. The screen of a tablet is smaller.

There is also a difference between the prices of the two technology. Laptops come in a wide variety and are usually more expensive than tablets.