Difference Between RAM and ROM 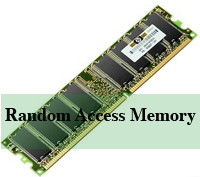 RAM (Random Access Memory) and ROM (Read Only Memory) are two very old technologies that were created in the very early days of computing. Despite that, they are still used nowadays even if the technical definitions of the two are not as applicable as before. The main difference between RAM and ROM is their use. ROM is used to store the code for programs that are run in the processor. In comparison, RAM is used to hold the temporary data that is created and used by the program.

RAM was so named because any area of the memory can be quickly accessed without having to go through everything else. This was in contrast to tap drives, where access time is linearly related to the current position of the head to the position of the data. The way ROM was named is also very similar; because old ROMs are made with the data built-in and there is no way to change it. Of course, both of these are no longer applicable. DRAM chips are actually accessed in bursts rather than randomly. ROMs are now made with flash memory that can be easily written to. Still, the old terminologies have been stuck ever since.

RAM is a volatile memory type, which means that it loses its content once power is removed. This is the reason why it cannot replace ROM, which retains its content even when not powered. The downside of ROM is its much slower speed. Using it to replace RAM would make a computer perform very slow.

Nowadays, RAM is seen mainly as the primary memory of computers and other gadgets like smartphones and tablets. In portable gadgets, the internal memory reserved for applications is often referred to as ROM. But in computers, ROMs retains its original meaning. The chip used to hold the BIOS is a ROM as it isn’t routinely written to; but it is sometimes updated. Optical drives are also called ROMS (i.e. CD-ROM and DVD-ROM) as they do read discs that cannot be written to; but most optical drives also have the ability to write to blank discs.