Difference Between Lions and Tigers 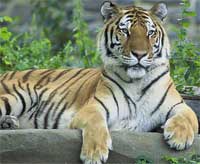 Although both lions and tigers are wild animals that belong to the cat family, there are many differences between these two big cats.

Their appearance is the most obvious difference between a lion and a tiger. Tigers have bold, black stripes across their bodies, whereas lions do not have any stripes. Tigers also do not have manes like the male lions. Male lions have a large mane around their faces.

The physical characteristics also differ between lions and tigers. Tigers are longer than lions, more muscular, and generally heavier in weight, although lions are taller than tigers. Tigers have stronger legs, and are much more active and agile when compared to lions. By nature, tigers are considered to be more aggressive than lions. Male lions are even thought to be lazy in a way, and will not do anything unless they really have to. Tigers are the more dominant big cat when lions and tigers are compared. Even in several cases where their genes have been mixed, the genes of the tiger have proven to be more prominent than the lion’s genes.

Lions generally like to live in large groups, and these are known as ‘prides’. In the pride there will be one male lion who is the head of the tribe, along with several other males and females. It is the female lion who hunts for food in the savannah. The females bring their prey back to the pride, and therefore, the male lions rely on the females for their meals.

On the other hand, tigers prefer to live and hunt on their own. Tigers hunt for their own prey in the jungle, and then eat their catch alone. Therefore, one can say that lions are definitely more sociable than tigers.

In terms of appearance, lions and tigers look completely different. Tigers are heavier in weight, more muscular, and have black stripes across their bodies. Lions do not have any stripes.

Male lions have a huge mane of hair around their faces; tigers do not have manes.

Lions live in groups, but tigers prefer to be alone.

Tigers are considered to be more active and agile than lions, and faster as well.

Tigers hunt for themselves; the female lions hunt for prey and brings it back to the pride for feeding.