Differences between basilica and cathedral 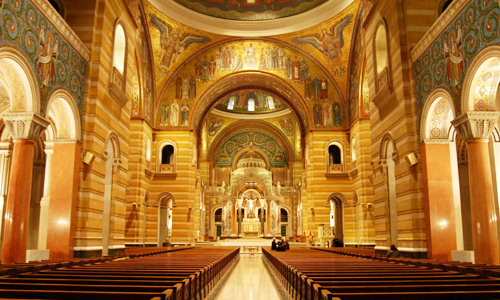 Many people consider cathedrals and basilicas to be the same although that is not the case. The confusion is due to a few similarities between the two such as both being associated with the religion Christianity but that by no means can be used to conclude them as the same. As we will now make clear, there are a number of differences between the two.

Let us begin with the definitions.  A cathedral is the church of Christians which is known to contain the seat of the Bishop. It is the central church of a particular diocese, episcopate or a conference. Not all churches are cathedrals although all cathedrals are also churches. Cathedrals are specifically those churches which belong to the denominations of the Episcopal hierarchy, such as those that include Roman Catholic, Orthodox, and Anglican and in some cases Lutheran and Methodist churches. Churches were made to be cathedrals first time in Italy, Spain, Gaul and North Africa in the 4th century.  They did not spread globally until the 12th century.

Basilica is a Latin word that has a number of distinct applications in English. The word was initially used to describe an open, public court building in Rome that would usually be located next to the forum of a Roman town. When Romans used the word basilica, they usually referred to a large hall that was high-ceilinged and had three long aisles. The basilicas were used as courts, as public meeting areas and also as indoor markets which were more like early forms of what we now call shopping malls.  The term was also used with an architectural connotation to describe central aisles. However, in the modern world, the most commonly understood meaning of a basilica is a very large and important church which has been given special and significant ceremonial rights by the Pope himself.

On taking a glance of the history of the two, we can see that a basilica was first time set up in Hellenistic Greece and was a tribunal which had the task of maintaining justice on behalf of the King. The word was later also taken up by the Romans when they annexed Macedonia in the 2nd century. On the other hand, Cathedrals were built for the first time during the middle Ages. They were headed by the bishop. Normally basilicas have greater significance than cathedrals but if the bishop of a particular cathedral is also head of the diocese, then this particular cathedral would outrank the basilica in his diocese. All the other cathedrals would remain as lesser significant compared to the basilica.

Differentiating the two in very simple words, with respect to their functions, we can further clarify what makes a cathedral different to a basilica. The latter is simply an important church building that the Pope designates and hence carries significant historical, spiritual and/or archaeological background. Once a church has been named a basilica it cannot lose its status of the same; hence the common saying, “Once a basilica, then always a basilica”. It may be or may not be the cathedral of its particular diocese. If we talk about church buildings, then a basilica has the highest permanent designation. A cathedral however may or may not have the status of a basilica. It is where the Bishop’s throne is and that would give that cathedral a greater status than a basilica. In simple words, it is the home church of the bishop or archbishop. It is also described as the building where the public sacrifice of the Mass is carried out.

1. Cathedral- the church of Christians, contains the seat of the Bishop, it is also where Christians offer their prayers, it is the central church of a particular diocese, episcopate or a conference, churches which belong to the denominations of the Episcopal hierarchy, such as those that include Roman Catholic, Orthodox, and Anglican and in some cases Lutheran and Methodist churches; Basilica-a Latin word, Romans used it to describe a large hall that was high-ceilinged and had three long aisles, were used as courts, as public meeting areas and also as indoor markets

2. Normally basilicas are more important than cathedrals, the exception being the bishop’s home church/cathedral

3. History- basilica was first time set up in Hellenistic Greece; Cathedrals were built for the first time during the middle Ages