Difference Between Flu And Stomach Flu 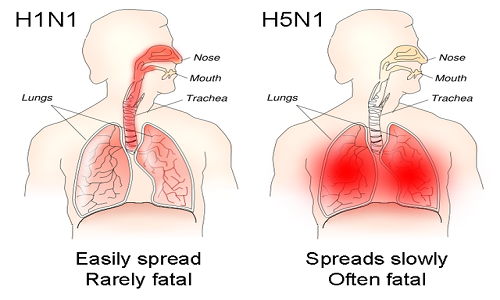 Influenza or commonly “flu” is a type of viral infection that is presented with symptoms like fatigue, fever and respiratory congestion. It is highly contagious and affects primarily the respiratory system. Flu is typically caused by influenza A viruses belonging to  strains H3N2, H2N2, H5N1, H7N7, H1N2, H9N2, H7N2, H7N3, H10N7, H7N9 and HIN1, two types of influenza B viruses and rarely by one strain of influenza C virus. Influenza often mimics the symptoms of common cold and in severe cases may lead to pneumonia and septicaemia. Antibiotics are ineffective in treating influenza as because it is a viral disease, however influenza may be managed by vaccines and antiviral agents. The influenza viruses may inhibit the formation of Adrenocorticotropin hormone which results in decreased levels of cortisol. Since the immune system is not depressed, there is a formation of pro-inflammatory cytokines and chemokines that helps to combat the viral infection and is also responsible for the fever, headaches associated with influenza.

Stomach flu, on the other hand is a misnomer because it actually refers to gastroenteritis that can be caused by bacteria, viruses or protozoan parasites. Since viruses can also be a causative pathogen for gastroenteritis, the condition is referred as stomach flu. The common bacterial species involved are Escherichia Coli, Campylobacter sp., Shigella sp., and Salmonella sp. The viral strains involved are Norovirus, Adenovirus, Cytomegalovirus and Herpes simplex Virus. The gastroenteritis or irritation and inflammation of the stomach and small intestine are caused by corrosive foods, contaminated food and water, and through lactose intolerance. The microbes access the gastrointestinal tract through contaminated food and water. The lactose intolerance develops due to an inadequacy of lactase enzyme that digests dairy products. The symptoms include abdominal cramps, nausea, vomiting, stomach ache, diarrhoea and dehydration. Fever and swollen lymph glands may be also noted in some cases of gastroenteritis. Gastroenteritis may be treated with anti-bacterial, anti-protozoan and antiviral agents as per the situation. A comparison between flu and stomach flu is presented below: