The Difference Between Gene Flow and Genetic Drift

Gene flow and genetic drift are population genetics terms which may be associated with changes in organisms’ genetic makeup. Both of these biological terms are commonly associated with natural selection and may be confusing to some. In explaining these terms, “allele” is often mentioned; it is a version of a gene which is at the same location on a chromosome. For instance, alleles for hair color are the dominant black hair and the recessive red hair.

Regarding their distinctions, gene flow is specifically concerned with the migration of populations as the alteration is caused by the introduction or elimination of an allele. On the other hand, genetic drift looks into the change of alleles’ frequencies due to random sampling from one generation to another. The following discussions further delve into these differences.

What is Gene Flow?

Gene flow is also termed as gene migration or allele flow. It is the migration of genetic variation from a certain population to another. This process is significant in actualizing diversity in a genetic pool. For instance, people in village A have very similar genetic makeup and this becomes varied when people from village B and C have children with those from village A.

Gene migration is often lower among species which are not that mobile, are situated in isolated areas, and have small population sizes. Inbreeding happens when there is a lack of mobility such as the case of the Black Footed Rock Wallaby which live in certain islands in Australia. Human assisted gene-flow is conducted to assist species which are threatened by extinction and low genetic quality due to high rates of inbreeding. For instance, an animal or plant from a different gene pool (coming from a different area) is introduced to increase the fitness of the small population.

What is Genetic Drift?

Genetic drift, also termed as allelic drift or the Sewall Wright effect, is the alteration of the frequency of a specific allele because of the organisms’ random sampling. This process is popularly illustrated through the marbles in a jar analogy. There are 20 marbles in a jar and 10 are color red while the other 10 are color blue. This represents the initial population of a specie. Afterwards, randomly pick a marble which represents the parents. Deposit another marble with the same color with that of the randomly picked “parent” in another jar until the second jar contains 20 marbles; these represent the “off springs”.  Most often than not, there is a change of the number of red and blue colors between the jars. The alteration of the red and blue ratio represents the genetic drift between generations.

There are two mechanisms which cause genetic drift:

This happens when the population has experienced a catastrophe such as an epidemic, flood, and fire. In this situation, a trait’s allele frequency has decreased since many organisms carrying that trait have been eliminated.

This happens when few members separate from the main population and form their own. Such event causes a significant drift of allele frequency depending on the mating preferences of the newly founded group.

Genetic drift is the alteration of allele frequency in a population’s genetic pool while gene flow is the process of alleles going from one area of population to another.

Cause of Gene Alteration

The cause of alteration in gene flow is the migration of organisms or geographical isolation; this means that alleles may be eliminated or new ones may be introduced while that of genetic drift is the random sampling of organisms from generation to generation as caused by the bottle effect or the founder effect.

In genetic drift, change can happen due to movement as evidenced by the founder effect in which a few members of the main population break away to form their own group. On the other hand, gene flow happens when there is a transfer of alleles from one population to another while the founder effect does not form its new group in an already existing population.

Gene flow is also termed as gene migration as it talks about the transfer of alleles from one area of population to another. It is also called allele flow as the change is due to the genetic variation, specifically the alteration of a version of a gene caused by migration. As for genetic drift, it is also called allelic drift or Sewall Wright effect which is attributed to Sewall Green Wright, an American geneticist, who is the founder of population genetics. Wright computed the amount of organisms’ inbreeding due to genetic drift. 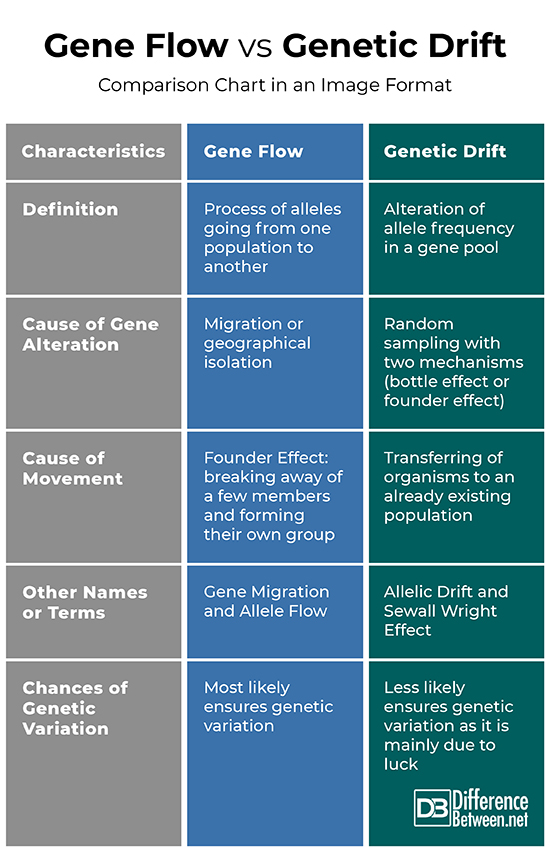 gene Brown
Jean Brown is a Registered Psychologist, licensed professional teacher, and a freelance academic and creative writer. She has been teaching social science courses both in the undergrad and graduate levels. Jean has also been a research adviser and panel member in a number of psychology and special education paper presentations. Her certifications include TESOL (Tampa, Florida), Psychiatric Ward Practicum Certification, and Marker of Diploma Courses.
Latest posts by gene Brown (see all)
Share Tweet Pin Mail
Categories: Science
Tags: Gene Flow, Genetic Drift
previous post Difference Between German Measles and Measles
next post Difference Between Retinol and Retinoid