Difference Between MPEG and AAC 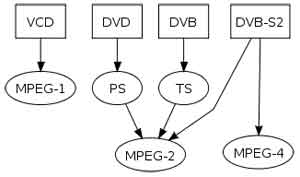 MPEG and AAC are two encoding algorithms that are used widely today in a lot of set top boxes and portables devices. MPEG is a very wide standard that spans over a few years and has covered a wide spectrum of capabilities in audio and video recording. Advanced Audio Coding or AAC is simply a subset of MPEG as it is a part of the MPEG-4 Part 3 standard.

MPEG is used in a lot of applications. It is used in encoding video files like movies and clips to a digital format. As we can clearly see from the name, AAC is only used when encoding sound files only. It has seen application as a replacement for the very popular MP3, another MPEG standard, format that has seen wide acceptance and use in portable music devices. When compared to MP3, we can definitely say that AAC is superior in terms of sound quality at a given file size. But it is technically wrong to say that AAC is better than MPEG as it is actually a part of the entire MPEG specification. Although AAC is for sound only, it is also used very often in encoding the sound component of the video clip.

When it comes to market penetration, MPEG is still the preferred format; especially in portable media players as all of these devices do support playback of MPEG compliant files like MP3 and MP4. In comparison, not a lot of devices support the AAC format but this is expected to change within the next few years due to its superior sound quality. A lot of the more recent devices like Blackberries, Nokia and Sony Ericsson phones have added support for the AAC format, thereby enhancing its availability. A major boost to AAC is the fact that Apple uses it as the default file format for their very popular music player, the iPod. It is also the default file format of the songs that can be bought from the Apple online store, iTunes. That, coupled with the fact that AAC has better sound quality, ensures that it would soon supersede MP3 as the most popular sound encoding algorithm.

Summary:
1. AAC is basically a subpart of the MPEG specification
2. MPEG holds both audio and video while AAC is specifically for audio only
3. AAC is able to encode audio at much higher standards compared to MPEG
4. A lot more devices support MPEG compared to those that support AAC