Difference Between Convection and Grill Convection is the movement of air or some other medium, initiating transfer of heat between two bodies of different temperatures. The grill methods uses one or more heaters directly heating the food. 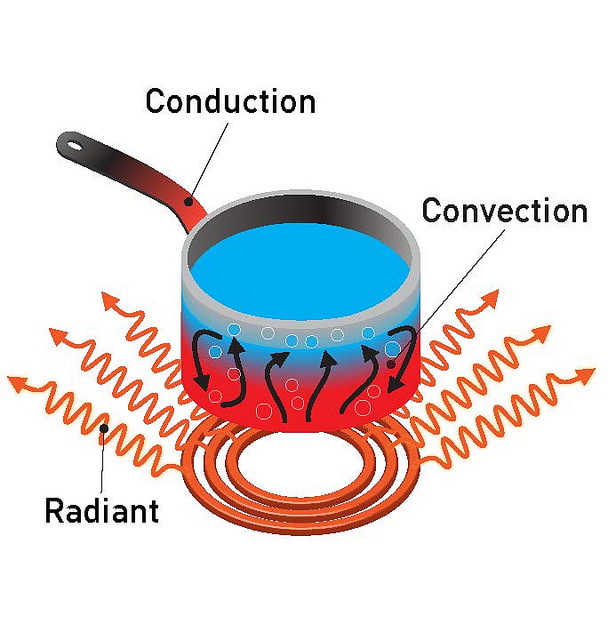 Convective transmission occurs between the external walls of the furnace and the environment, as well as between the interior walls and the work piece and the internal atmosphere.

During the heating of the medium (e.g. air), a spread and a decrease in density occurs. The warmer medium rises due to the lesser force of gravity that affects it. This kind of heat transfer occurs when the cooler air from the surrounding atmosphere contacts the heated outdoor furnace walls. Also, natural convection occurs between the interior walls and the gas inside the furnace.

Electric furnaces are a typical example of natural heat transfer (convection) in a closed space. The heated gas conveys the heat by convection to a heated piece and on the walls. However, in such furnaces, there is a complex heat transfer, where besides the convection there is radiation.

The transfer of heat by radiation occurs between heaters and the work piece, as well as heaters and walls. In a convection furnace, the heating elements are similar to the traditional one.

The only difference is that the oven has a fan inside which circulates the hot air inside the chamber. By blowing this air, the food is cooked, and the heat is transferred faster.

In traditional furnace ovens, the temperature inside the oven is raised by one or more heaters. After the air warms up, it rises above the top of the cooking space or chamber. The issue with the mechanism is that when the heat starts to get accumulated at the bottom, closer to the heater, or at the top, so the food gets uneven heating.

Difference Between Convection and Grill

Definition of Convection and Grill

Convection is the heat transfer process of air flowing through the interior of the oven. As a result, the temperature in the oven becomes homogeneous throughout the volume of the enclosed space and the hot air blows allow the product to be heated evenly from all sides. Grilling method is when a very hot, dry and direct heat is used to heat the air – usually the working piece is close to the source.

Heating method of  Convection and Grill

Convection of air is a complex process when the warm and cold air stream change places, gradually mixing with each other and creating a whirlwind of hot air in the closed space. Typically air is mixed with the help of fans. The grilling uses dry heat to roast the working piece – it incorporates grill (tube that heats up).

Advantages of Convection and Grill

In case of convection the circulating hot air around the oven is not the only benefit, there are other advantages of the convection oven. The convection oven area helps to save a lot of time, money and energy when is properly used. It also eliminates the problem of uneven cooking. Advantages of grill oven are easier clean up, it provides more handy access, and cooking is typically faster.

Disadvantages of Convection and Grill

Disadvantages of convection method is that the temperature inside the oven may change dramatically when the door is opened and will affect the cooking time and results. Also the furnace walls get dirty quickly (self-cleaning technology is very useful in this manner). The main disadvantage of grill is the difficulty of regulating the heat transfer – so the food can be over or under cooked.

Usage of Convection and Grill 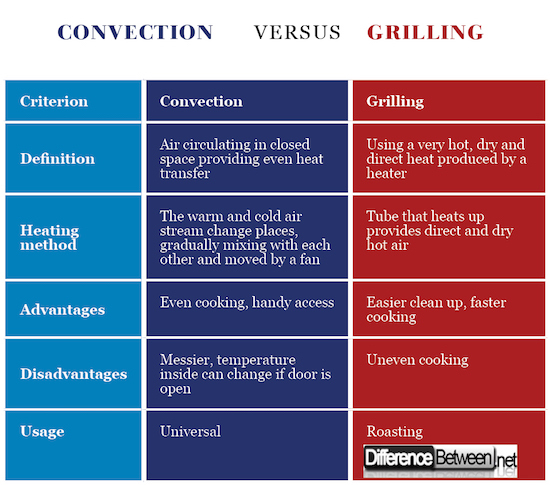 Summary of Convection and Grill

Convection oven uses hot air that circulates through the space to heat up the food. The air is commonly transferred with the help of fans. Given that the convection oven prepares food by circulating the heated air through the oven, it can help remove the “hot spots” and the uneven cooking sometimes occurring in traditional ovens.
Grills refer to the method of cooking incorporating heaters (tubes) that provides direct and very hot air to the working piece. It is best used for roasting.