Difference between Ethanol and Ethanoic Acids 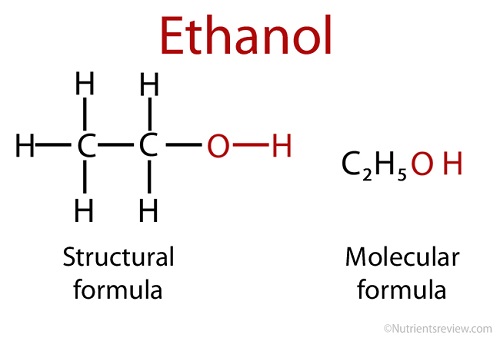 Ethanol is also referred to as ethyl alcohol and has the molecular formula C2H5OH.

It is comprised of an ethyl group (C2H5) and a hydroxyl group (OH).

It has a strong odor that is similar to a perfume, and it can evaporate quickly (i.e. it is very volatile).

Ethanol is a component of alcohol that people drink. It has a depressing effect on the nervous system and is toxic, particularly in large enough amounts.

When consumed as an alcoholic beverage it is converted by the liver to acetaldehyde and eventually to carbon dioxide and water.

If a person ingests too much alcohol too quickly, it can lead to coma and even death.

Ethanol that is to be consumed by humans in the form of beer, wine or similar alcoholic beverages, are produced as a byproduct of the process of fermentation of a particular substrate. Sugars and ethanol are produced in the process.

Fermentation in which ethanol is produced usually uses yeasts such as Saccharomyces cerevisiae or Schizosaccharomyces.

Ethanol can also be converted into different intermediate products for use in industrial applications such as the manufacturing of plastics.

It can also be used as an additive to motor vehicle gasoline, where it becomes known as gasohol.

What is Ethanoic Acid?

Ethanoic acid is also referred to as acetic acid. It has the following molecular formula:
C2H4O2 or CH3COOH.

It is considered an acid since the H+ proton can dissociate from the molecule. When a proton is lost, the molecule remaining is referred to as an acetate ion.

The ethanoic acid has a low pH of 2.4 at a 1.0 M concentration. The boiling point of ethanoic acid is between 118 to 119 °C, and it is also a volatile compound.

It has a distinctive vinegar odor and is a colorless liquid.

Ethanol without water present is known as glacial acetic acid.

Ethanoic acid is a carboxylic acid, which as the name implies has a carboxyl group (-COOH), to which is attached a methyl group (CH3).

Ethanoic acid is a hydrophilic solvent that can work on both nonpolar and polar substances, which makes it very useful in industrial applications.

Ethanoic acid can be formed by combining carbon dioxide with methanol or by oxidizing acetaldehyde.

It is a component of vinegar, where it can form as much as 9% of the vinegar.

It has a corrosive effect on metals, and it can be reduced to form ethanol by nucleophilic acyl substitution.

Ethanoic acid can be used to form polymers such as those used to make plastic soda bottles and even glue for wood.

It is even used as a food additive because it can adjust the acidity of substances.

Difference between Ethanol and Ethanoic Acid

Summary of Ethanol and Ethanoic Acid