Difference Between Gametophytes And Sporophytes 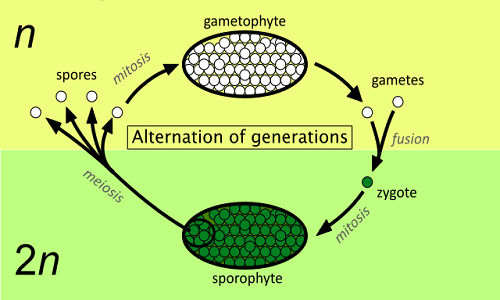 Plants are multifarious organisms which show various degrees of evolution which ranges from plants that are not differentiated into leaves stems and roots like Thallophytes to those that are fully differentiated, like the Angiosperms. Some plants like the Cryptogams (Thallophytes, Bryophytes and Pteridophytes) are non-flowering and do not produce seeds, whereas the Phenerogams are flowering and produce seeds. Even among the Phenerogams, Gymnosperms have naked seeds however in angiosperms; the seeds are well protected inside a fruit. The life cycle of plants is as complex and diversified as the morphology or anatomy or any other aspect of the same. Irrespective of the level of hierarchy, all plants show alternation of generation in reproduction. Using a multicellular gametophyte alternately with a multicellular sporophyte in for the purpose of reproduction is called Alternation of Generation. Depending on a plant’s grade on the evolutionary ladder, one stage is more dominant than the other.  These two stages are different in various aspects, as listed below.

How they are important in Alternation of Generation: Gametophytes produces male and female gametes, by mitosis which fuse to form a zygote, which in turn gives rise to a diploid sporophyte which generates haploid spores, each of which again gives rise to a gametophyte. This process helps alternating haploidy with diploidy. A sporophyte reproduces asexually and a gametophyte sexually.

Significance: For a diploid (2n) sporophyte to produce haploid (n) spores, the cells have to undergo meiosis. While a superficial glance at this phenomenon shows it as a kind of biological phenomenon that halves the number of chromosomal sets, it actually involves a process of much deeper importance. During this amitotic division, the internal repair mechanism of a cell restores the damaged parts of DNA to normalcy and when the damage is irreparable kills the cell thus preventing abnormalities from being carried to the next generations, thus giving adaptive advantage in favour of meiosis(1). There is also a selective advantage in producing haploid spores. When an aberrant part of genetic material slips through the scrutiny of the repair mechanism and forms a spore, it is eliminated by the environment when the trait expressed causes a disadvantage to the gametophyte that has germinated from it.

Sporophytes and Gametophytes in different groups of plants: Although both of these stages are common through all the plant groups their status and level of complexity is different across the same.