Difference Between IgM and IgG 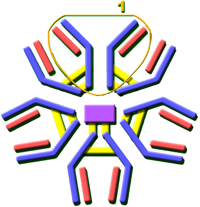 An immunoglobulin or antibody refers to proteins that bind to antigens in specific cases. Both IgM and IgG refer to a class of immunoglobulin. Antibodies are produced by the immune system to fight antigens like bacteria and viruses. IgM refers to those antibodies that are produced immediately after an exposure to the disease, while IgG refers to a later response. IgG generally confers immunity to a patient so far as that particular disease is concerned.

There are a different immune responses to different antigens or ‘enemies’ that threaten the body. For instance, the antibody produced by your body in response to an exposure to chicken pox is different from the response it produces in case of mononucleosis. At times, the body may mistakenly produce antibodies even against itself! This results in an autoimmune disease.

Immunoglobulin G or IgG is the antibody that is found most abundantly in the human body. It is found in all bodily fluids and it protects the human body against bacterial and viral attacks.

IgG and IgM are usually measured together by your doctor when you go in for a test. When they are evaluated together, they give your doctor a better idea about the functioning of your immune system.

An important difference between the two antibodies is related to exposure. While IgM antibodies are usually found in a human body after it has been exposed to a disease, IgG is the long term response of the body to a disease. For instance, if a kid is exposed to chickenpox, he will show elevated results of IgM in the blood in the period following the exposure. Once the child gets the disease, he acquires long term immunity against it by developing IgG antibodies. While IgM is an indicator of a current infection, an IgG indicates a recent or past exposure to the illness.

IgM is the first antibody that the body produces in an acute infection. It is approximately six times larger than IgG and is multivalent. This means that it has multiple binding sites. In the case of IgM, the number of binding sites is 10! However, only about half of these can actually bind to an antigen.

IgM is a temporary antibody that disappears within two or three weeks. It is then replaced by IgG which lasts for life and provides lasting immunity to the person.

Summary:
1. IgM is the immediate antibody that is produced once a human body is exposed to a bacteria, virus or a toxin
2. IgG is found throughout the body, mainly in most of the bodily fluids, while IgM is found mainly in the blood and lymphatic fluids.
3. IgM is larger in size compared to IgG
4. IgM is temporary and disappears after a few weeks. It is then replaced by IgG.